Have been working on this for about a month. 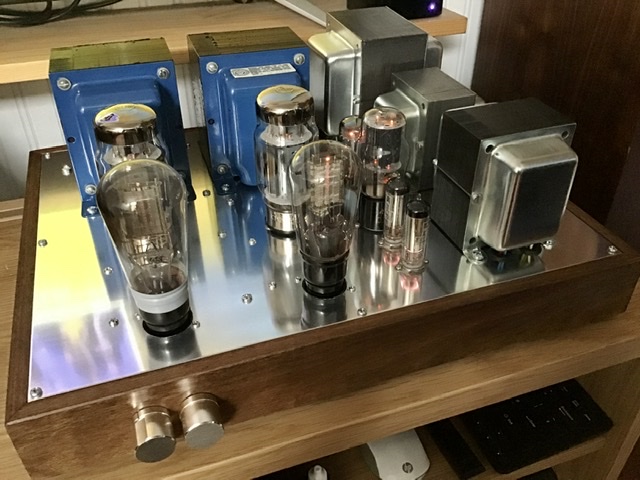 Plinth is by our Ant (BTE Designs) I paid him to build me a proper hardwood plinth, as he can do a far better job of these things than I ever could, and I wanted this to be a more permanent addition to the system, with looks that suggest permanence, rather than ‘bodge,’ as RD used to call it.

He used afrormosia for the surround, and supplied me with an aluminium top plate that would complement the glow from the tubes. I think it has worked beautifully.
It’s the same idea as the version 1 of this circuit; just two stages of amplification.

The big glass globe pre/driver stage at the front is a pair of pre-war, mesh anode, Marconi MH4 high gain triodes. These use 150H chokes, as their anode load, which gives them twice as much driving voltage swing as the conventional resistor load would. This choke loading arrangement ensures that they will give powerful, low distortion drive to the KT120 output valves at the rear, which are ultralinear configured, to give 16W of single-ended power per channel. 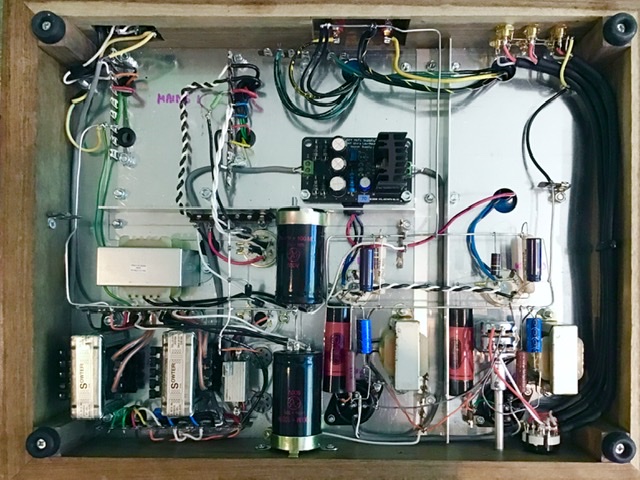 In the context of the full system: 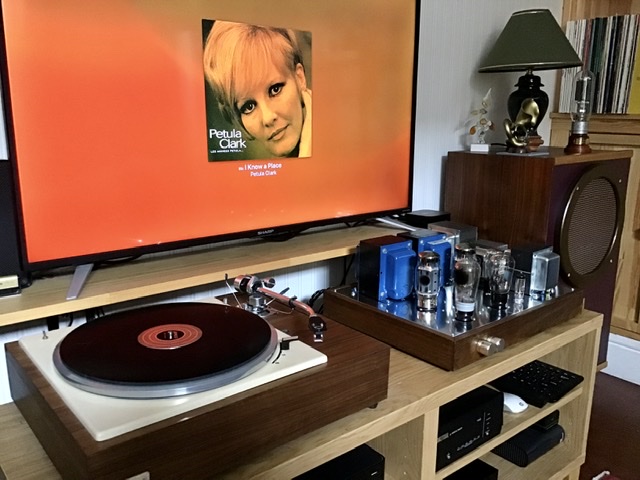 As you can see, I like mid century retro.

Looks marvellous that does, nice one!
Top

OK,
So the final power configuration for this amp, is a Mullard GZ37 rectifier on the power stage supply, simply because it will do 350mA of current, so the 220mA combined draw of the two KT120 is no trouble for it. The GZ34 will only do 250mA max, so I thought the GZ37 more appropriate for this particular application. 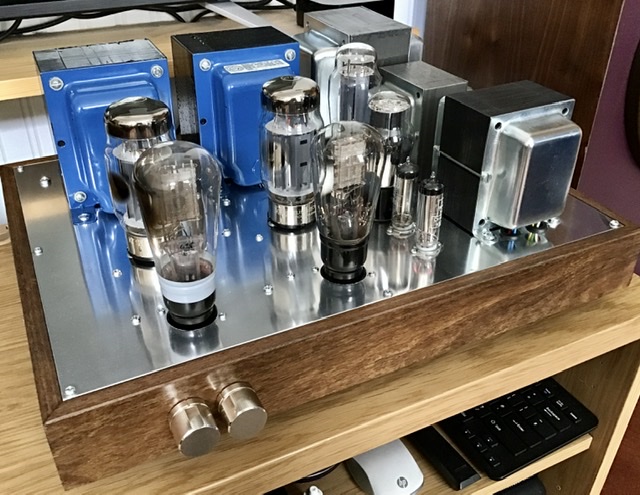 The input stage supply is running a Raytheon 5Y3G, rectifier, because out of the small rectifiers I have, it drops the most voltage, and therefore puts a little bit less pressure on the shunt regulation components, as I have to get rid of around 90-100V across the current setting resistor between the raw supply output, and the top of the 2x108V series VR gas tube stack (the two pink glowing small tubes; one behind the other, at front right) This stack gives a stabilised voltage of 216V, which makes up the feed to the input stage.

The series VR gas tube stack is the valve version of a zener diode string, and acts to stabilise the running conditions of the input stage. It shunts 20mA to ground when under full load, and 30mA to ground, for the no-load condition, whilst it waits for the front end valves to warm up. When everything has settled, the MH4 front end runs bang-on 200V at 2x5mA and -3V bias, dissipating just under 1W for each valve.

So to the sound quality:
Well, all the usual tired clichés apply, such as hearing things on familiar records; things that were just noises in the background, take on their own individual identities, hearing to the back of the recording and all that jazz. The most significant thing is the human touch it brings to both solo vocalists and massed voices alike. And I reckon it has to be the choke-loaded, mesh anode, pre-war Brit valves that are responsible for this, as the output stage circuit is identical to the Lockdown Valve Amp 1. I’ve never heard anything like that level of musical insight from anything else I’ve fed the KT120s with, and I’ve had KT120s in all sorts since 2013.

In terms of bass, treble and midrange: it’s ages since I built anything with a regulator, and I must say that even with just the simple VR tube stack shunt regulator, on the input stage supply, the bass goes way deep and is as tight as a gnat’s chuff; all of which is a real bonus, especially since the output stage is ultra-linear configured, and there’s no global feedback; a win on that front, I think. Welcome back small signal stage regulation. I’ve missed you.

The mids are just there in the room, with no peakiness, nasality, or edge to the proceedings.

The top end is clear and clean, with all the tinkly bits present and correct and some new tinkly bits I didn’t know were there. Plus there’s no sharpness or any other nastiness; none that I can hear anyway.

Decided yesterday, to make the amplifier a power amp rather than an integrated.

Our Ant had ages ago, rebuilt my old balanced output passive; the expensive one I had once used with my balanced push-pull amplifiers. This is now a single ended passive, retaining the big Khozmo stepped attenuator and Elma selector switch with silver plated contacts. The whole thing is built into a new wood/acrylic case.

I removed the wiring to the main amp’s selector switch and the three pairs of input sockets, replacing it with a single core foil/braid, shielded cable per channel from one left and one right socket pair, straight to the input valves. The setup does of course introduce an extra cable from the passive’s outputs, to the main amp; nevertheless, the overall result in comparison to the cheap carbon track pot, was something akin to taking a blanket off the speakers. As RD would say, a cleaner window into the music. Never ceases to amaze, how much one can keep cleaning the analogue window into the performance. 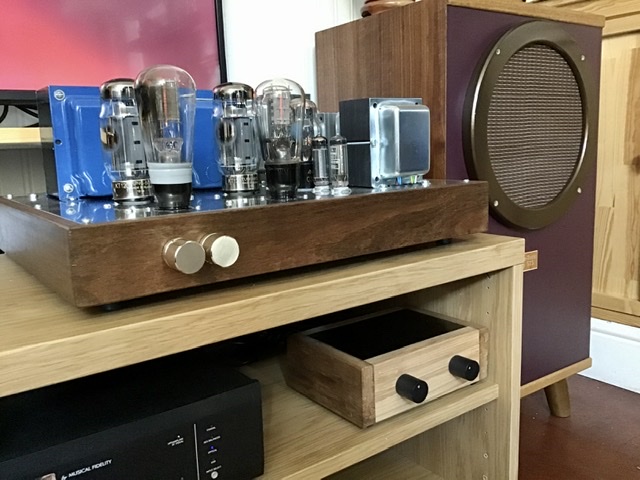 The passive can be seen underneath the main amp. I’ve left the redundant knobs on the power amp for now, until I can get a badge made, to cover the holes that will be left when the controls are removed.