That has me thinking about the Visaton G20SC tweeter. That is the tweeter doc used the most before finding the chinese one that he doped. It is 88 dB rather than the 90 dB of the G25ffl that i use now. And it's £20 cheaper

A G20 will fit on the same baffle as the bass driver. If i use the G25 as the in firing tweeters and G20 for the rest then i get 2dB more output firing inwards. That would be good for when off axis and nearer one speaker than the other. Usually you would hear more of the nearer tweeter but if the in firing tweeter of the further away speaker was louder then that may even the balance.

The frequency response of the G20 is not quite as nice high up as the G25 but nobody has ever had any complaints. G20 is less directional though as the soft dome is 5mm smaller - a good thing in an omni directional speaker ??

It's amazing how many recordings have either over done bass or just muddy, or no bloody bass. Listened to a few recently that have it about right i think.

Although Bob Marley is thought to be bass heavy it isn't really. The bass parts are the tune a lot of the time yet it is always tight, you can hear all the notes clearly, it is lovely and textured and i don't feel the need for less or more bass volume.

Kate Bush, Supertramp, The Police, Fleetwood Mac are other examples where they have it about right.

I play Foo fighters One by One quite often and that bass is as muddy as hell. Well i don't reckon much to the recording at all to be honest. Some electronic music is just plainly over done as well as some Jamiroquai. I can understand some listeners with their speakerettes liking it as they have no bloody bass on anything. But get a speaker that is cable of reproducing it and you can run in to problems which need taming (i know).

A lot don't have enough bass for my liking. Nick Drake, Blue note jazz (some) , Led Zeppelin. Bloody hell, if i was John Paul Jones i would be well upset.

I suppose it's a balancing act trying to reproduce all these recordings to your liking unless you have a graphic equaliser or a mechanical thing of some sort that can be altered on the fly. I don't want an anologue or digital graphic equaliser in the chain, it goes against my minimalist beliefs. So i am left with mechanical ways of changing bass output. Moving speakers back to the wall or away from the wall between albums is not something i could be arsed doing.

I could live with a volume control just for the bass drivers and one for everything else or one for each driver (bass, mid and tweeter) but then changing volume becomes a bit of a pain in the arse and expensive. An aperiodic vent whose size can be altered on the fly might also work for me.

Changing the speaker frequency response to suit my ears, equipment, room and taste has just blown my audiophile credentials out of the water. There, i need to say it. I am not an audiophile

Couldn't give a toss to be quite honest, if it is good to my ears then it is good

Some might say just balance it to cover all types of music and recordings and forget about it.
DIY inspired by Richard "The Doc" Dunn RIP
Top

Fleetwood Mac Rumours is one of the quietest cd recordings i own. As i don't have a volume control i can't turn it up

For those that did not know, Visaton do a 13mm (half inch) dome tweeter with possibly a neodymium magnet(although it never mentions it) because the thing is so small (34 mm cut out). 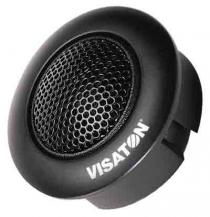 It's 4 ohm rated and 86dB. Frequency response doesn't look as good as the G20sc or G25ffl but you never know.

That's the best thing about it i think.

Worth considering even though they are described for in car use. When has that ever meant anything. The 5" and 12" drivers are classed as PA drivers but that doesnt stop you using them for hifi. I might get a couple and try them out, only £28 for a pair.
DIY inspired by Richard "The Doc" Dunn RIP
Top

Much cheaper than i thought (like over £100 cheaper). Don't buy any from Impact Audio

I am listening to Kate Bush - The Whole Story and sat here spell bound. There is detail on this i never knew existed.

Driver run in is very real. The surround and spider need to free up which should make the bass more fulsome as time goes on. I had forgotten about speaker run in . I hope the run in of the new 5 inchers improves the music not the other way around. Maybe i should delay final judgement until they have a hundred hours or so on them.
DIY inspired by Richard "The Doc" Dunn RIP
Top

Changed my big bass cubes back to front firing to compare to up firing. I still have the upper cab on legs but these are shorter now (10cms) and the second 5" driver is still down firing. I put the 60 cm sq concrete paving slab back on top of the bass cube like i had before.

I must say i still prefer front firing bass drivers even after only listening to albums since the change. I so wanted the up firing bass to be my favourite but it is not

Have to abandon my latest design then and go back to front firing isobaric bass although it was fun messing about.

I still have the down and up firing 5" drivers. I don't see much point in having the second one down firing so there are going to be some revisions. I can put the second 5" on the up facing baffle right next to the other one. The slot loading space between the two cabs seems like a waste of space to me now and could be valuable extra cabinet volume.

So, the next deign is going to be this;

*floorstanding one piece cabinet of about 90cm height and 35 - 40cm width and depth.
*front firing clamshell isobaric 12 inchers (at floor level)
*front, up, in & out firing tweeters (four in total)
*aperiodic / passive cardioid bass loading to the rear of the cabinet

I have options with the second 5". Up firing next to the first one or side or front firing

.Hey what the hell, i could have up, front, in & out firing 5 inchers just like the tweeters. In the back of my mind i know that is what will end up happening eventually so why prolong the agony. the drivers are only £10 a pop anyway. Another two needed per speaker so four in all. I have enough plastidip and bison kit.

They will be sharing the enclosure of the bass driver though, no separate enclosure or back boxes. Then there is the puzzle of how to wire them all up (and the tweeters). Series or a combination of series and parallel. I can have an influence on which driver of the four is the loudest to some extent. As these speakers will have a six pack of monoblocs up their arse then i have a certain freedom that i would not have if they had to driven by just two monoblocs.
DIY inspired by Richard "The Doc" Dunn RIP
Top

) there is still a niggle with the way it presents the bass. It is like it is loading the room too much on the bass heavy music i like to play. It is absolutely fine with 95% of the music i play so maybe it is the actual recordings doing it ?

These things are still what i would call musical, are very tuneful and they definitely time well. There was 3 " of foam bunged in flush with the back and the back panel removed. The wall is 8" from the back of the speaker. I don't feel bad about using foam as the back panel is removed. This gives a very different result to having foam in a sealed enclosure i think.

I have doubled up the thickness of the foam in the back of the cabinet to 6". Shoving my head round the back of speaker the volume is much less than before . What a result. This has about the right qualities of bass i am looking for with these particular drivers

I suppose i am a bit of a bass head, i get to hear well played amplified electric bass twice a week at band rehearsals. That is my reference. I have a feel for how it should sound mixed with the other frequencies. I often walk around the room when the rest of the band are playing so i don't just get the perspective of how it sounds when i am sat behind the drums. Maybe i have got too fussy ?

I am going to have to try the up firing bass again with this extra foam in (sorry) and see what occurs. Designing and voicing a speaker to sound good in this room will mean it probably won't sound any good anywhere else