Latest thoughts turn to driver modifications. These cheap pressed steel basket drivers are said to ring. Well steel does ring. Some well known to the diy community mods are

*fill in the gap between the steel basket and the magnet with something that sticks well, doesn't go completely hard and also damp. This can strengthen the basket, dampen ringing and reduce air turbulence at the back of the driver.

*apply strengthening and / or dampening to the basket struts. Making these pressed steel struts a oval shape is an idea I thought of or just stick something absorbing on the inside face of them.

It is said these things can have a substantial audible effect especially with drivers with pressed steel baskets. As Tesco says "every little helps". If it reduces coloration, is cheap and works in a mechanical way then what's not to like.
DIY inspired by Richard "The Doc" Dunn RIP
Top

Anybody interested in adding material to the basket and filling in the basket to magnet interface should read the following thread started by Dave at Planet10 on diyaudio. Thanks Dave

Got the 6.5" bipole speakers in the system again. I have made them bigger so they are now 22.5 litres minus the volume the drivers take up . Also I have redone the mechanical link between the two opposing magnets with hardwood that have screws in the end to fine tune the length.

For me the enclosures are still too small

22.5 Litres is more than the volume of two cube2's and the box is still aperiodic. So I am now worrying that these won't go near the wall. I have played all my bass heavy music and it is a little too much. I had things rattling in the room with Portishead Dummy which reminds me of my battles with the 12 inchers

The balance between the mid bass and tweeter has changed because the 6.5 inchers are more sensitive. Another factor is maybe my room can't handle a 6.5" bipole . Too many unknowns which is the problem when trying to design speakers by ear with no measurements.

I need to have a think. Having no volume control I can't attempt to level match the two versions of these speakers. Plus the tweeters need to go up in level I think. I have a number of things to play with so it's not over yet for this version.

I am sick of building speaker enclosures now

I have enough crap chipboard to build more speakers so I might build 25 litre cubes for these 6.5 inchers and do the whole steel lining thing the same as the 5" version.

If that is still inferior to the 5" version then I will abandon the 6.5 " version. A shame because the bigger drivers go a bit lower and are more sensitive. They are also a bit more exciting to listen to probably because it took less dope to tame them. That is why I have the urge to carry on with them.
DIY inspired by Richard "The Doc" Dunn RIP
Top

I brought four pairs of wires out the back of the tweeter pods now so I can mess about with different wiring schemes. I have started with a parallel series arrangement which brings the load to 6 ohms rather than 24 ohms of the four tweeters in series.

That has brought the upper mid and high frequencies up in level compared to the bass. There is a better balance and the enclosure doesn't sound too small anymore

I have blocked the aperiodic vent so back to closed box at the moment. Sometimes the frequency balance is out and I stupidly think it's the box volume at fault every time

this is much better but still not perfect. The mid range is a bit too prominent for my tastes so I will need to change the line level high pass filter capacitor (again)

. I want to avoid putting in a padding resistor if possible as I kind of like the fact there is nothing between the amps and any of the drivers apart from wire. It's a bit of a balancing act this. Will get there in the end and if the speaker ends up with a bit of a mid range dip then I won't be bothered as it is that region that usually annoys my brain the most.

Need to order some more polystyrene caps - 500pf, 470pf, 430pf. Currently got 560pf in and last time I tried 390pf the mid range dip was too much. I need to solder in some binding posts are something so I can whip these different caps in easily without having to desolder and solder another one in. Also polystyrene caps are easily damaged by too much heat so avoiding the heat of the soldering iron might be a good idea.
DIY inspired by Richard "The Doc" Dunn RIP
Top

Herein lies the problem with having four tweeters with only one firing at you. The ones firing upwards and to the sides have some of their highest frequency output absorbed by the room so the tweeter's lower frequencies become more prominent. I suppose this could be a good or bad thing depending on what you wanted to achieve.

If playing with the high pass filter capacitor value doesn't deliver the goods then I have the option of making the box slightly smaller - 21 Litres will be twice that of the Cube2's.

to three which if wired in series will be a 18 ohm load. More volume than four tweeters in series but less than with the six I have now. I did think about three in series and one in parallel but that gives a 4.5 ohm load which is going in the wrong direction. Two tweeters in series would be 12 ohms but then the advantage of lower distortion from more tweeters starts to be eroded.

Then there is a padding resistor but I am loathed to take that route. Will try it though if all else fails. There is always the bipole 5" to fall back on as that is about perfect for me now

But this 6.5" version is overall more sensitive which is good

Been milling over several things we have discussed- I also remember Doc saying the second tweeter in his ‘2’ box build would be inward firing.
I’ve done this but both tweeters on the top plate. The effects are promising but it occurred to me to add a second filter in the second cap so it’s producing only the extreme upper
What do u think 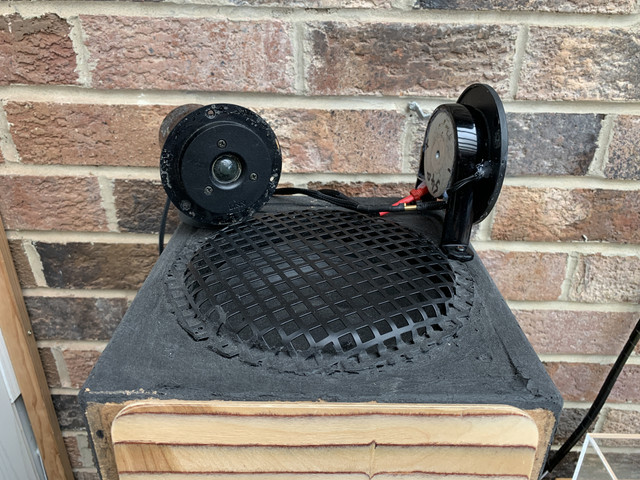 Latteman wrote: ↑Wed Feb 24, 2021 2:17 pm Been milling over several things we have discussed- I also remember Doc saying the second tweeter in his ‘2’ box build would be inward firing.
I’ve done this but both tweeters on the top plate. The effects are promising but it occurred to me to add a second filter in the second cap so it’s producing only the extreme upper
What do u think

Not a bad idea and if you do it Peter then make the one pointing at you producing only the higher frequencies (ie rolled off higher). The thing is that tweeters get stressed when they are producing low frequencies so that is where the gains are to be had form having more than one with only a first order high pass filter (only a single capacitor).

I would want them both to be covering the same frequency range to achieve the lower distortion. Don't let me put you off though. There's nothing to stop you rolling one of them off higher - it's your journey and you might have something you like or you may not in which case something learned.

P.S I like the black plastic fall pipe brackets you are using to hold the tweeter.

Interesting, I was planning to have the side firing one rolled off higher.
I’ll have to try it both ways

Latteman wrote: ↑Wed Feb 24, 2021 8:47 pm Another thing- do u notice the effect of angling the cubes- such is my current format that the cubes are parallel to the back & side walls and the tweeters are directed for taste- the cubes have better bass response than angled- bizarre!

Only just noticed you had done that. I tried it with my 5" dipole as they sound best right against the wall. As you say, the tweeters need to be adjustable. My 6,5" bipole however, won't go against the wall as the bass is too much