Can’t u tell I made it

Pair of bamboo bowls glued together and Lidl lettuce washers- £8 per speaker pair !
Yep it’s all interesting and unfortunately I think- “what if I ………” it will never end

Pair of bamboo bowls glued together and Lidl lettuce washers- £8 per speaker pair !
Yep it’s all interesting and unfortunately I think- “what if I ………” it will never end

They all have their own pro's and cons. Everything has a resonance frequency. Light but very strong is very appealing. Mass stores energy. Steel is attractive due to its weld ability but it has potential to ring. Concrete is very rigid but heavy in the thickness required. Acrylic would be nice but it is expensive. If cost was no object then acrylic would have been ordered but it is not easy to machine without melting or cracking.

The Visaton tweeters are good and I see no reason to explore further. I am even starting to think about trying a dopeless approach. There are 5.25 " drivers with a well behaved response and a higher sensitivity that when used firing up and down should be good with no doping or electrical filters.

The other thing going through my head for quite a while now is trying a three way approach. Although I currently have three drivers per speaker if is still only a two way as the up and down firing mid bass have exactly the same output. A 2.5 way in the up and down firing configuration makes no sense as that is only used for baffle step compensation and the opposing bipole approach already has BSC.

I have two nice B&W cast frame 6.5" mid bass from my old transmission lines that could be used as down firing bass drivers. They should have suitable Qts for a sealed cabinet. The Vas and required box volume is about right Although I don't know these values exactly. The sensitivity is 90 dB. Using a larger bass driver is not an option without the sphere becoming too physically big.

The big thing with this is I would need an electrical filter on the 6.5" bass driver

Luckily the power amp boards have a low pass filter already built in to prevent the amplification of radio frequencies etc. All that needs to be done is to change the capacitor value to change the knee frequency down to what I would need. A 35cm sphere will have a baffle step of 6dB just like any other enclosure. The 3dB (middle) point of this for a 35cm sphere will be 330 Hz approx. That will be the xover frequency.

So I then require an up firing mid range driver from 330 Hz up. Relieving the up firing mid of low bass duties is the big win here. The low xover frequency rules out the use of a dome and anyway, I don't want the xover from bass to mid any higher. I have found a suitable 4" cone midrange with a lovely response that will not need a low pass filter. It will require a high pass filter though at 330 Hz. That will be done passively at line level too. No added components required as all it will need is the change of a single capacitor value.

This 4" mid is good up to 10 kHz so I will need to increase the existing high pass filter knee frequency that I already have. Having relieved the tweeter of more lower frequency output and potential distortion I may try a single forward firing tweeter again and compare. Having a single point source for tweeter may have enough advantage over the multiple tweeter approach but that trade off can only be assessed by listening and comparing.

There are lots of changes of approach here and a few trade off's effected. Only comparisons and listening will sort this out.

Hey Stu- just another thought- does an open baffle design (mid/bass drivers) have to point at the listener or could they be made to work up firing ????
Currently playing with it 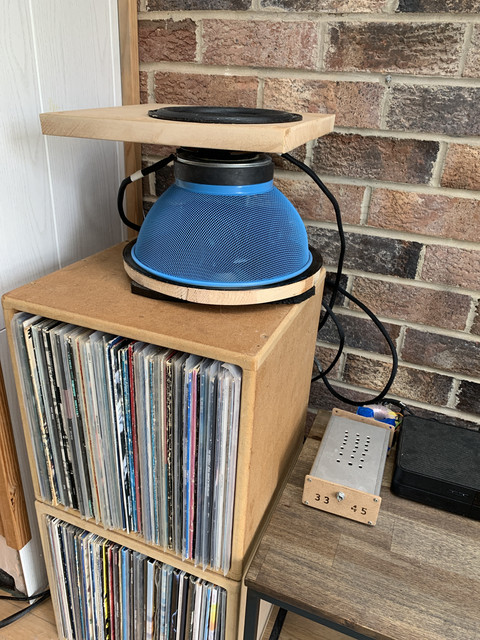 Latteman wrote: ↑Wed Sep 15, 2021 2:45 pm Hey Stu- just another thought- does an open baffle design (mid/bass drivers) have to point at the listener or could they be made to work up firing ????
Currently playing with it

OB has a figure of 8 sound field with the nulls being at the sides. If the cone is not pointing at you then you are likely sat in a null. That said, I tried one of my doped 12 inchers with magnet sat on the carpet firing up under my bipolar cubes. It was interesting - it evened the room response out a bit but robbed the bass of it's impact which I personally can't live with. I'm a bit of a bass head. 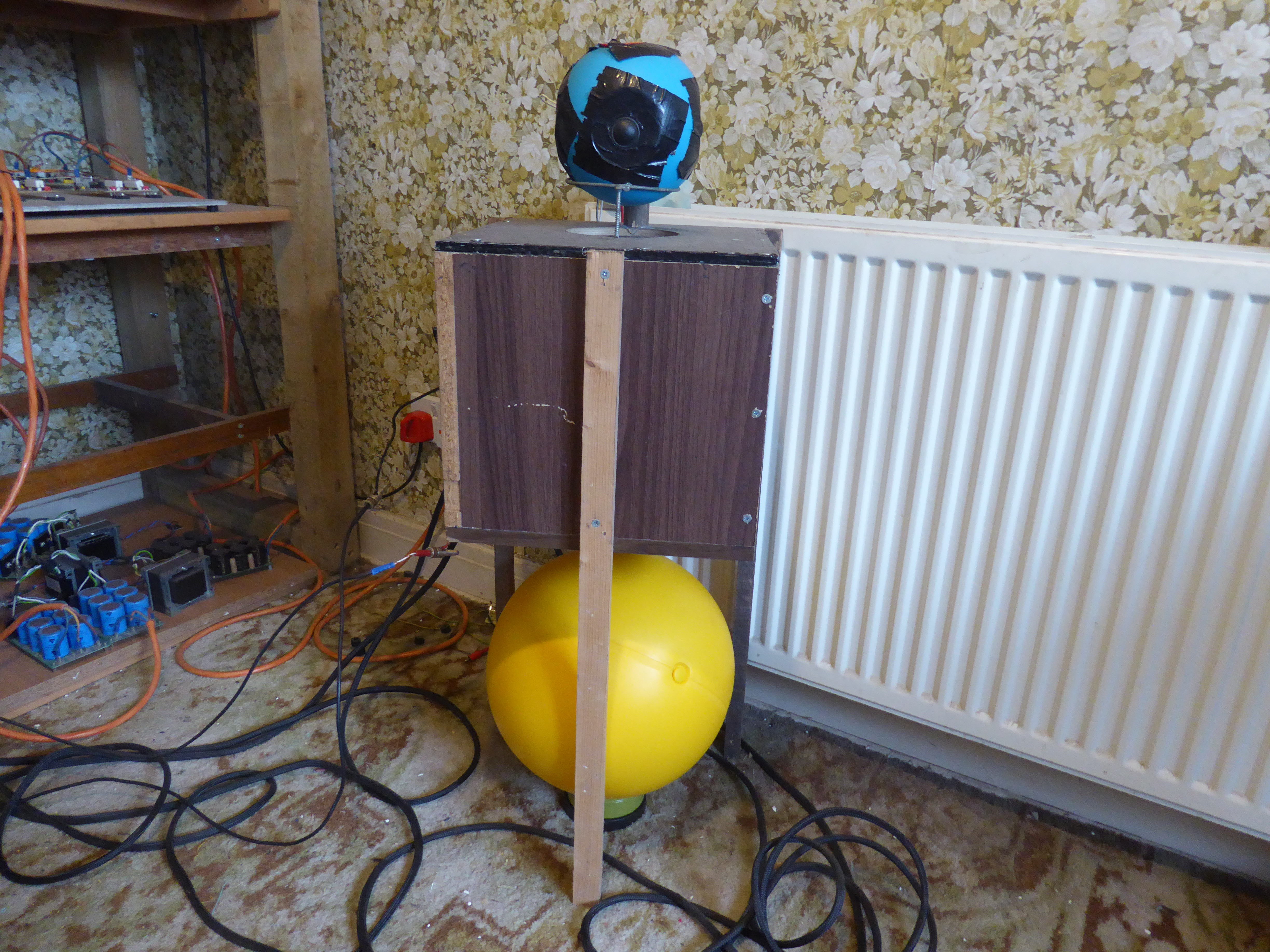 Put it under the down firing mid bass. It has had quite an effect. Simply by changing how close to the driver the ball is changes the amount of bass.

More on this when I get home

These speakers break the point source rule (as do nva cubes btw) - when more than one driveris used the two adjacent drivers should be less than a quarter wavelength at the xover frequency from centre to centre.

With up and down firing mid bass that are both doped and running full range then that distance is way over a quarter wavelength at 7kHz where they roll off and hand over to tte tweeters. In fact these speakers break a lot of rules but I don't care, I am engrossed in the music whenever I listen to them.

This 30cm ball under the down firing mid bass is acting as a reflector / diffuser what ever you want to call it. I had the ball an inch from the driver initially. That produced the lowest amount of perceivable bass and as it gets further away the bass becomes more prominent but less detailed. I am a bit of a bass head which is why I like the bipolar opposing driver baffle step compensation but with this sphere at a certain distance from the driver the frequency balance is still to my liking but the bass is more detailed. That's my second hang up - detail. If the artist wanted you to hear it then I want to hear it.

I need to listen to this much more and compare. I was relying on the carpet to soak up a little of the higher frequencies but that won't be happening as much with the sphere underneath. It definitely deserves to be taken further as a concept. It is doing something J like and it can't just be raising the mid frequencies relative to the bass cos I had that pretty much sorted for the room and my ears and preferences.

Something is going on and I like it. Without measurements and more knowledge I can't put my finger on why (microphone measurements won't be happening btw).

I still intend to separate the two hemispheres with a 25mm circular disk of birch ply to break up the internal dimensions. I have rigged up a way of using my 300mm chop saw to accurately cut off the top of each hemisphere. Then I will cut a donut shape out of flat steel for a flange and weld it from the inside leaving just enough for the mounting flange to be flush with the circular cut out.

I will probably add a small amount of bitumen damping to the steel not much is needed though with metal of this thickness. There may also be a tiny bit of fibreglass stuffing in the centre but jot much. Steel legs can get welded on .
DIY inspired by Richard "The Doc" Dunn RIP
Top

Feeling quite flush and eager to get these finished so gave in to my inquisitiveness about more expensive drivers. The plan is to use some better drivers which won't need any doping but can still be run full range (no filters) just like doc's original cubix speakers.

I have found a suitable driver which has a published FR graph which is about as smooth as I am going to get. Starts to roll off naturally about 7 kHz so ideal. It's also a 5,25" which when modelled in winisd gives a suitable enclosure size. It is also 88d so 4dB more efficient than the cheap Chinese jobbies (84dB even before doping).