J hadn't considered that but I will do now

Most people say OB's need to be at least one metre from walls.

The following link suggests that is not always the case

) I decided to give the dipole 12 incher another go but this time with the bipole 6.5" cubes. I wasn't expecting much difference but there was a slight increase in bass power.

That was with the 12 inchers orientated the same as I did with the 5" bipole cubes. I tried toeing the cabs so the 12 inchers were not parallel to the wall. That had a small effect but not a great deal. 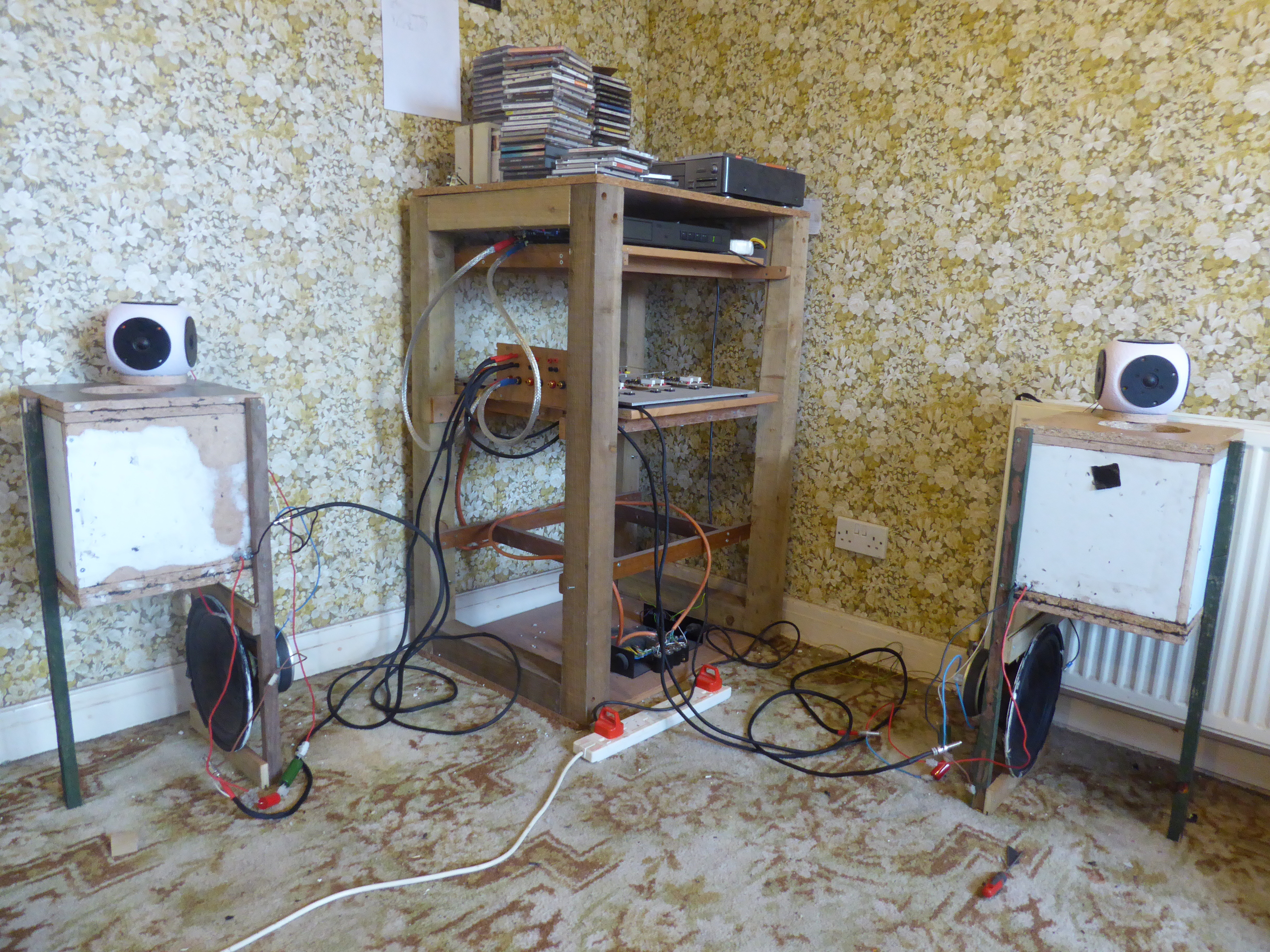 The arse end of the 12 inchers are now facing into the corner that my speakers are placed across. I could not believe the difference this has made

Bass is much meatier with more flesh on the bones and some things in the mid band that were annoying me a little have gone away.

Playing my bass torture albums and the speakers go deep and are fruity but at the same time very well behaved regarding room modes. I can only guess that the figure of 8 dipole effect is at work here. The back of the speaker is now facing into the corner which is quite a distance away rather than the 15cm it had before. One of the nulls is now facing the wall behind the speaker.

I am enjoying listening to this and it seems to be a more even frequency response than the other dipole experiment. It has the edge even on the aperiodic bipole 6.5" effort. However, I can't rule out the chance of falling out with it as I play more music. Not moved around the room much yet either.

After reading this thread https://www.diyaudio.com/forums/full ... 3.html I realise I may have something a little different to a dipole 12 jncher with helper mid bass.
DIY inspired by Richard "The Doc" Dunn RIP
Top

The Hifi World designing speakers series of articles suggest that room certain things can be done to maximise bass in an open baffle design.

1)Use the available room gain which in small rooms can be considerable and increases the lower in frequency you go
2)Use boundary proximity which increases bass output at 3dB per boundary.

Seems to go against what a lot of people say regarding proximity to walls for OB. The experiments they did with the Wharfedale SBF/3 and their recommended placement did in fact prove that getting one side of the baffle against a wall and one metre from a corner did give the best frequency response.

With me firing across a corner this seems to be applicable. The SFB/3 was a single speaker from the days of mono. In today's stereo world you would have to position the speakers one metre from the corners and toed in so that one edge of the baffle is much closer to the wall. My 12 inchers are more than one metre from the corner that they share and are firing parallel with the wall so the baskets are facing the corner. Seems to be working very well but I have helpers in the case of the up and down firing mid bass.

They found that if an open baffle is out in the room away from boundaries then a driver with a Qts of 1 or over is required. However, if the drivers are near a boundary or two boundaries (floor and wall) then a high Qts driver can sound boomy. They suggest that with close to wall and floor position a driver of much lower Qts works better.

The drivers I have are quoted at Qts of 0.5. Probably wrong and doping adds more. With the helper mid bass I don't suppose it matters.

I probably have an uneven FR but to be quite honest I don't care. It is really nice to listen to with a bass that doesn't seem to pressurise the room like it did, more bass detail on offer and the whole presentation has an airy quality to it. Probably not as much as a true dipole but with the sensitivity and Qts of these 12 inchers I don't think I could get enough bass without the aperiodic mid bass dipole. It is fun though mixing the two up and the dipole qualities of the 12 inchers are making a difference .

You could have just bought a pair of Cube's Stu.

Where's the fun in that ?

Yes, I could have saved a few years of faffing about but the experience / journey is just as important as the destination.

Anyhow, these are going to be better than Cubes

I think the amazing bass response is entirely due to the floral wallpaper.

That room was my bedroom from a baby up until I fled the nest. That is original 1979 wallpaper, I remember it being done (just)

Maybe one day it might come back into fashion ?
DIY inspired by Richard "The Doc" Dunn RIP
Top

Just had a thought- based on all u have done / tried- and I believe u have tried it all, except???

Thinking laterally (or rather Australian) what about a nice stand alone tweeter, eg the mini cube on a pole with the cube- preferably cube 1 or 2 size attached to the ceiling- why does it have to be attached to the floor and firing up- why not firing down but tucked away above the tweeter cube??????????!
Analogue Source - DIY turntable- donor Thorens TD321, DIY Single pivot Carbon Tonearm; Grado Reference Platinum FL; Nva Phono 1 (160va);
Lenco GL59, G101 tonearm, Ortofon MC10/MCA10 Yaqin M23B (Les Box)
Digital Sources- Linn Mimik, iPhone 6s (base adapter)
Amplification KHOZMO Acoustic Passive Pre - & Nva A20LE (