More faffing about with speakers. Whilst I enjoyed the dipole 12" I have got rid now. There was just something mildly annoying about the back wave reflecting off the walls. I enjoyed it whilst it lasted but It was flawed and going to complicate the build too much. So back to the bipole 6.5 inchers.

In other news I read about the "bipole dip" in FR but it only applies on axis with the driver and as these are up and down firing then I am always off axis, unless I stick my head right above the up firing mid bass

Most bipoles are designed front and rear firing although castle did some with front and up firing but they are not true dipoles which need to be fully opposing. Also you can find some designs with side firing bipoles but I haven't found any like mine which fire up and down. Or maybe I just have not looked hard enough.

Dave Planet10 on diyaudio.com has been a gold mine of information on bipole designs

Todays faffing about has been concerned with a niggling little thought that the tweeter reflections off the top facing baffle are maybe having a negative effect on things. The top baffles are at such a height that when I am sitting down any reflections will not be able to go straight to my ears (which is good) but rather require at least one more reflection to reach my ears.

Still, I have been pondering a slight annoyance with cymbals which seem a little over the top at times especially open hats on some of the Donald Byrd stuff I have. I don't know if it's me that has a particular sensitivity to that and without measurements I will never know - but this is a measurement free zone if you hadn't already guessed. I go by ears, emotion and enjoyment.

Found some material to put on the top surface of the baffle. Don't have any felt but got some stuff out of an old car seat. Sellotaped it on (no laughing at the back). 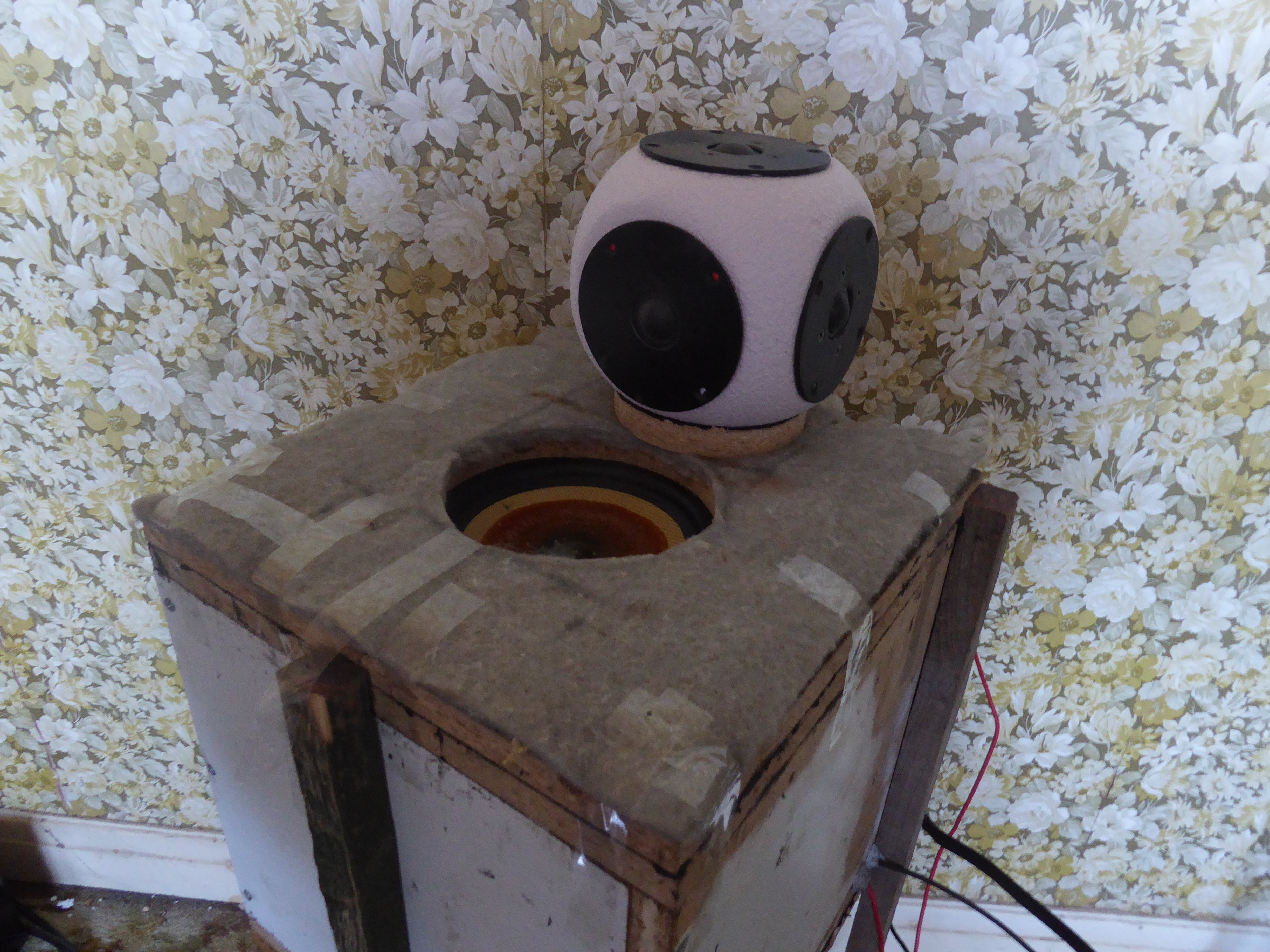 That seems to have had a positive effect but not quite there yet to my ears and taste. Sure, things are very exciting and it sounds like music should - dynamic, open and lively (not sat on hifi like) but there is something still grating. Nothing too major and only fine tuning I think.

still trying to fine tune things to get them perfect for me. After lining the top of the baffle with absorbing material and noticing it's positive effect I can only think of three more things to do.

First one was add more dope to the up firing driver. This was duly done, not much added though. As the speaker is level I just poured it on without removing the driver. You can play music straight away after doing it I find although things do change a bit once it has gone off. it made a slight difference but i am sure now that there is no need for anymore. I didn't do the down firing mid bass as I think the carpet soaks up a bit of the upper frequencies already but I will eventually do it for nothing more than matching the drivers as best I can for reasons such as force cancellation.

Second thing to try is also easy and quick to do. I whipped the top off each speaker and put some open cell foam about 3" deep in the speaker cabinets touching all four walls to keep it in place and half way between the opposing driver's magnet. It totally killed the music, bass was soggy and uninspiring, mid and highs just had no get up and go. Replaced that with a 1" thick piece of foam the same dimensions as the speakers internal width and depth and placed that in the same place as the previous foam at half way between the opposing driver's magnets.

That has done the trick. Took away the edge that I was finding a little annoying in the mid and lower treble (this driver rolls off about 8 Khz) . I will get lightning bolts from Doc for sure after doing this but I really do prefer it. Absorption in the centre of the box is said to have much more effect than lining the walls which is why I put a 1" layer of open cell foam dividing the cabinet in to top and bottom. There is a balance to be had with stuffing as when I tried 3" thick foam the music disappeared leaving some dull and flat pair of speakers that you would most likely find from the 1970's and would require Doc modding

I think I have found the ideal amount and position but have only tried one position and two different amounts.

The last thing to try on my list is doing generous round overs on the mid bass cabinet. Doc implied that diffraction wasn't worth bothering about. I do however politely disagree. When I moved my tweeters from a square pod to the foam dice with rounded edges there was a dramatic improvement in the music. As the mid bass box is still producing music over 10 Khz then there maybe some merit in trying to minimise diffraction from that also. It can't hurt to try.

The shape which gives the least diffraction is a sphere (H.Olsen). I can't see that happening here to be honest as the enclosure will be wider, deeper and taller at it's extremes. Round overs will have to do but they need to be substantial to make a difference which gives construction much more complexity and it eats in to box volume. Not sure how much I can afford to do here. A 1" round bit is about the biggest I could go with a router of diy proportions. Anything bigger than that is going to be a real pain in the ass and require a totally different construction approach.

Thinking laterally (or rather Australian) what about a nice stand alone tweeter, eg the mini cube on a pole with the cube- preferably cube 1 or 2 size attached to the ceiling- why does it have to be attached to the floor and firing up- why not firing down but tucked away above the tweeter cube??????????!

I am not sure I am quite with you here Peter, apart from suspending it from the ceiling. Do you mean suspend another cube above the tweeter cube I already have with just a down firing tweeter in it?

You got me thinking about tweeters now Peter

I tried moving the tweeter pod a little so there is no tweeter pointing directly at my listening position. 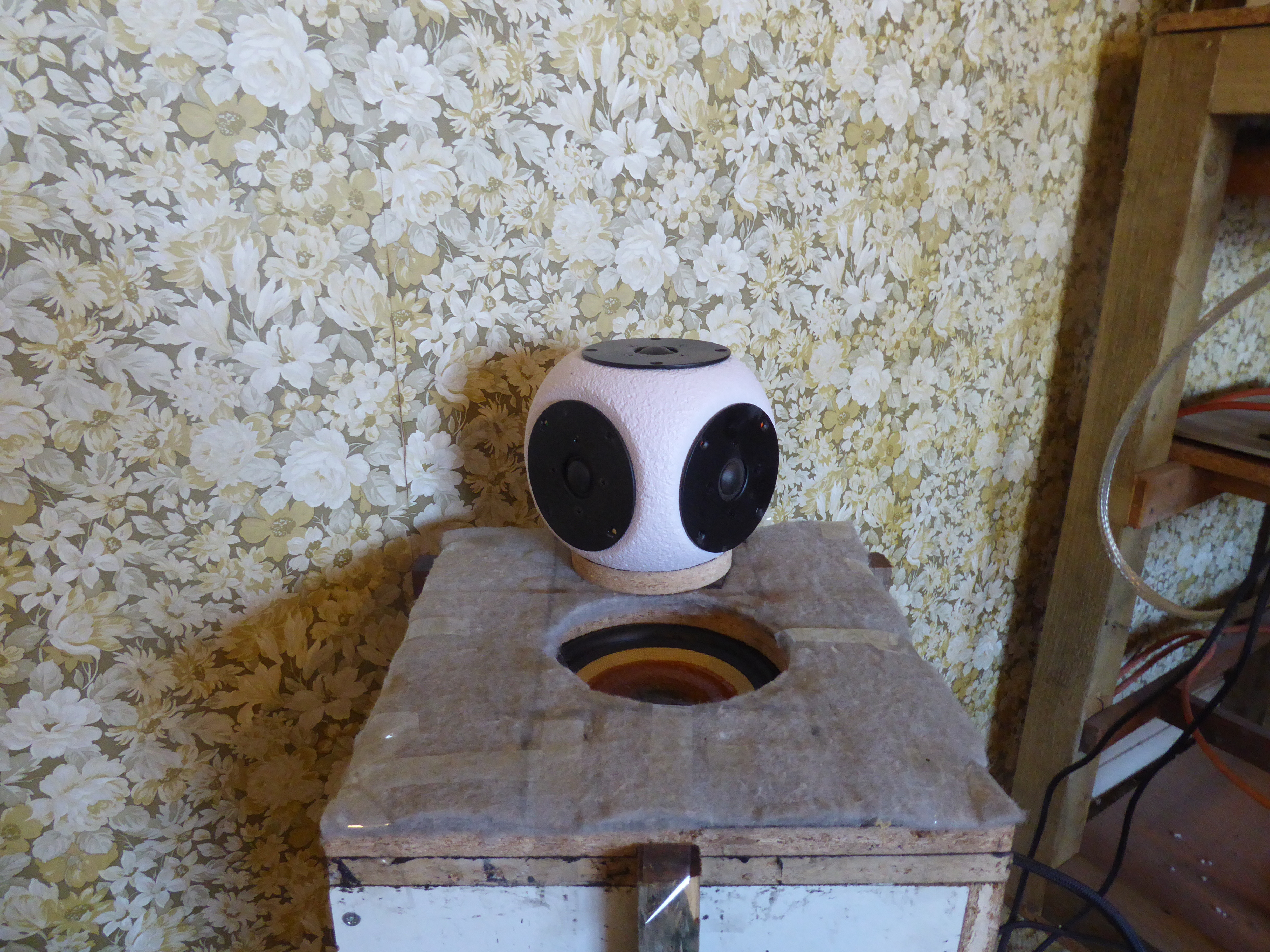 As tweeters become more directional the higher you go up in frequency, I am now sat out of the traditional sweet spot. I am now starting to think I have a hearing problem because I like this.

Is this going to start a whole new raft of experiments with tweeters ?

The speakers have now become more invisible than before. With instruments panned hard left and right it is now not obvious that the sound is coming from that tweeter. It is still panned to that side but doesn't appear to come straight out of the tweeters like when I had one firing directly at me.

Have I got a problem with treble ? Quite possibly.

) so that my family and I (four of us) can all enjoy good music spread across two adjoining sofa's. Anybody in a direct line form any tweeter is going to get the full treble experience, in a bad way, especially if it is the nearest speaker which is doing it. Not so bad if it is the one furthest away.

Latteman wrote: ↑Wed Feb 10, 2021 1:49 pm Suspend/ fix a cube with the mid bass to a ceiling or back wall so it fires down - it’s above the tweeter cube which is the only floor based speaker

Oh, I get you now. Me being thick

I am now worried that the ultimate speaker for me is going to end up being more of a true omni like Shahinian, Walsh or Carlsson 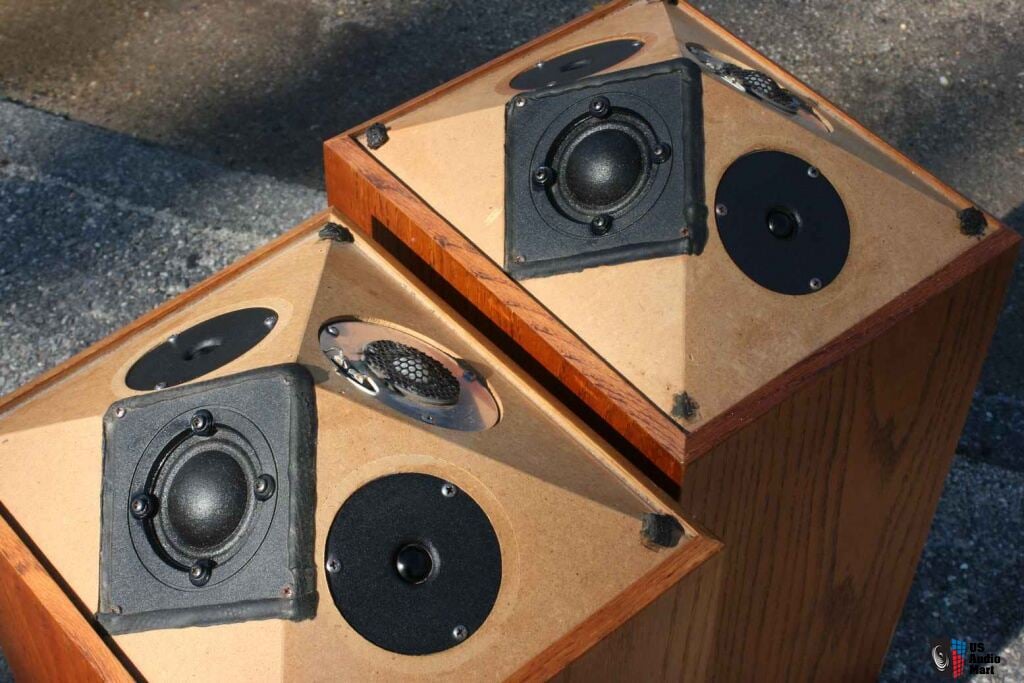 That is the Obelisk .

The top of my bipole cube could possibly be a truncated pyramid with the mid bass on the upper face pointing directly to the ceiling. Then three tweeters pointing forward and to each side on the sloped sides .

Need to think this through some more. Would keep the up and down firing bipole mid bass, no mid bass filters, closed box or aperiodic. Not sure about a fourth tweeter on the back facing panel.

Tried something a little different. Used a wedge of brass bar to tilt the front of the tweeter pod up. Like this ..... 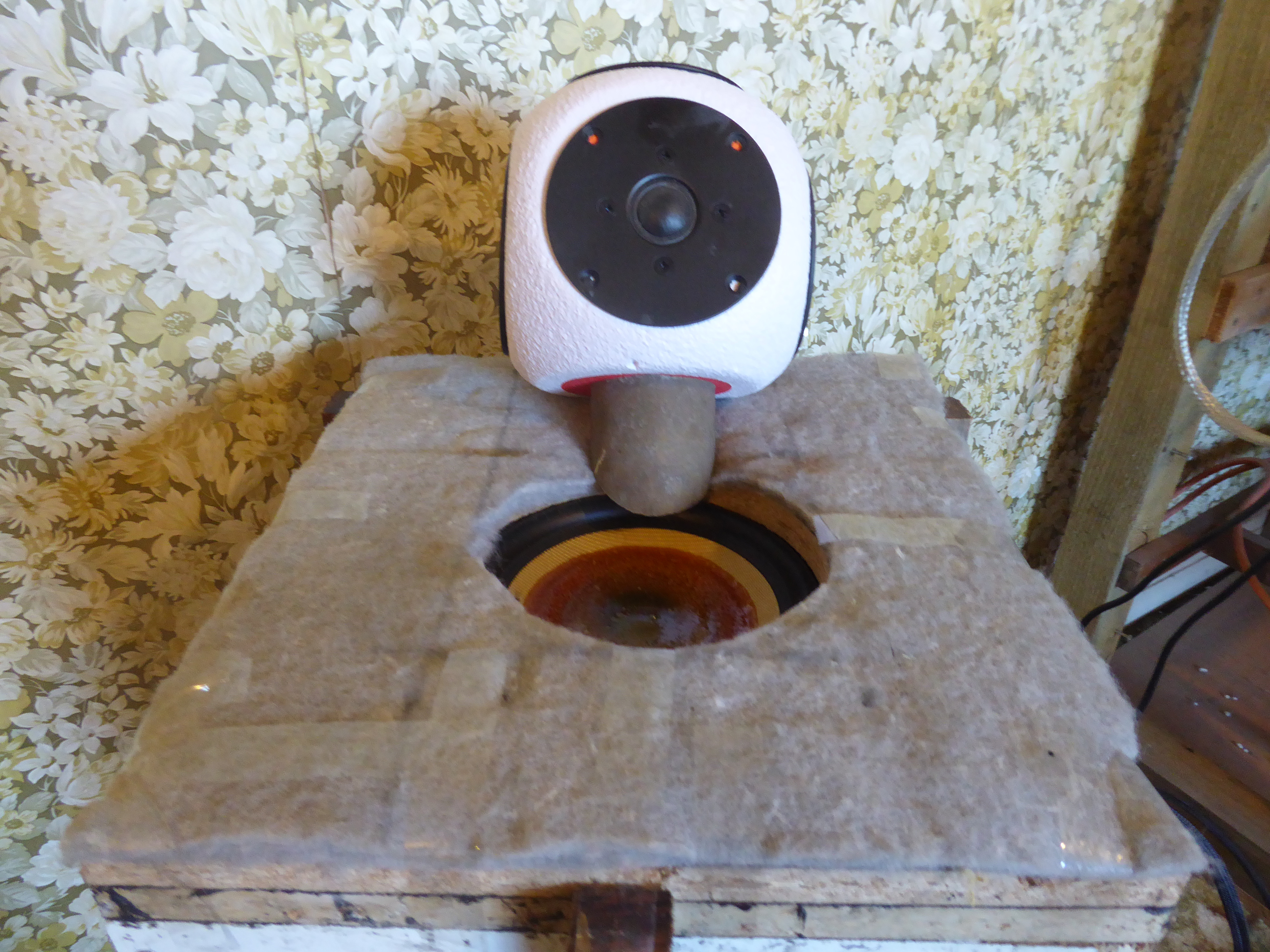 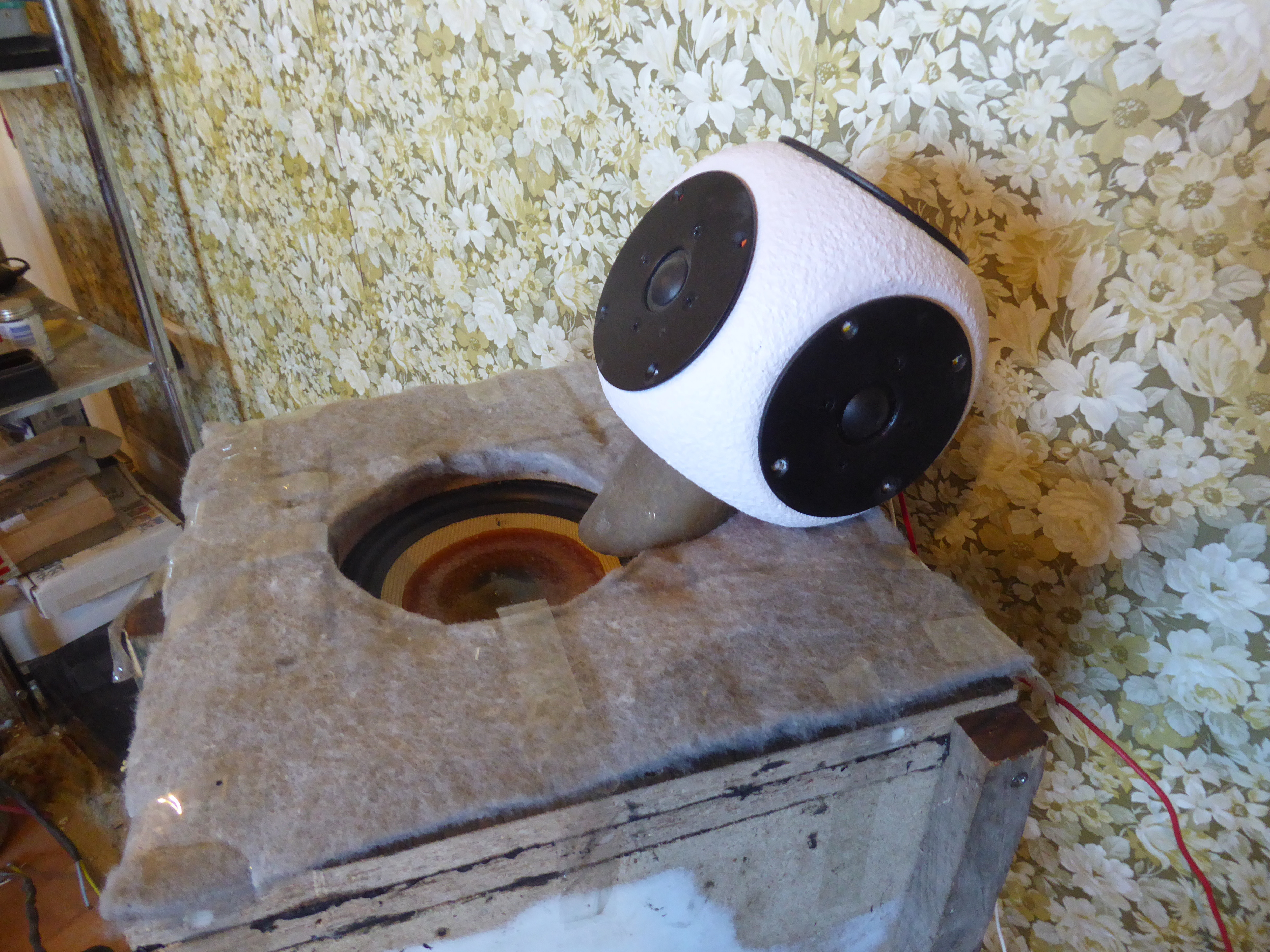 Listening to it now. Not sure what to say yet about this little tweak.

Listening to Stevie Wonder Innervisions. Mistra know it all is simply spell binding, especially the cymbals. The sound stage seems to become wider, extending to the outside of each speaker at times. some percussion instruments on Don't you worry 'bout a thing really highlighted this.

Further thinking and maybe I don't have to do a truncated pyramid. Maybe the speaker pod can still be behind the up firing mid bass but be a rounded edge pyramid instead. Won't need another up firing tweeter so it doesn't have to be truncated. I may try ditching the back firing tweeter as well and drop to three as last time I had a rear firing closer close to the wall I ended up preferring it without.

That would leave three tweeters, an uneven number but it doesn't matter. Can be wired in series like the four are now. Could do with a touch more treble volume anyway which is what will happen when the impedance is reduced by removing a tweeter. Could also play with having one of them louder than the other two by having two in series and one in parallel to those - the one in parallel will play louder than the ones in series.