The logical next step is to remove the output caps in my sources and add an input cap to the two mid bass amps just for blocking DC. 3.3 uf should do. That will mean I have the same number of phase shifting capacitors for the mid bass and the tweeters, effectively having removed one from the total in the chain before the tweeter( the xover capacitor)

So there will be no electrical phase difference between the tweeters and mid bass. But they point in different directions so mechanically out of phase by 90 degrees (if that means anything). Maybe its a whole load of effort for nothing but getting rid of a filter seems like something worth doing (we all know what the Doc's view of them was). Anyway, the high frequencies will benefit from being driven directly like the mid bass.
DIY inspired by Richard "The Doc" Dunn RIP
Top

More faffing about here. The good thing is that now the high pass filter is before the power amp I don't need to change capacitors when trying different things.

I changed the polystyrene caps that I am using for the line level high pass filter for a larger value and that worked out really well. In fact the best yet. A slight dip in the mid range now makes for an easier listen although more work to be done.

I wired the two mid bass in parallel for a 4 ohm load on the mid bass amplifier. That sounded horrible as the mid bass was too loud compared to the tweeter. The overall volume is very noticeably louder. That halving of the impedance gets you another 3dB. If the two drivers were close coupled next to each other then that gets you another 3dB. However mine aren't close coupled so 3dB gain but amplifier is doing more work.

To get that to sound right I will have to change the tweeter wiring scheme from series to a series parallel scheme which should bring things back in to balance by halving the impedance seen by the amplifier from 28 to 14 ohms or thereabouts.

Before I do that I wanted to try a single tweeter again for a sanity check. I got out the trusty pair of Visaton G25ffl that have been side lined since I did the tweeter pod. Wired them in and screwed them to the back panels. 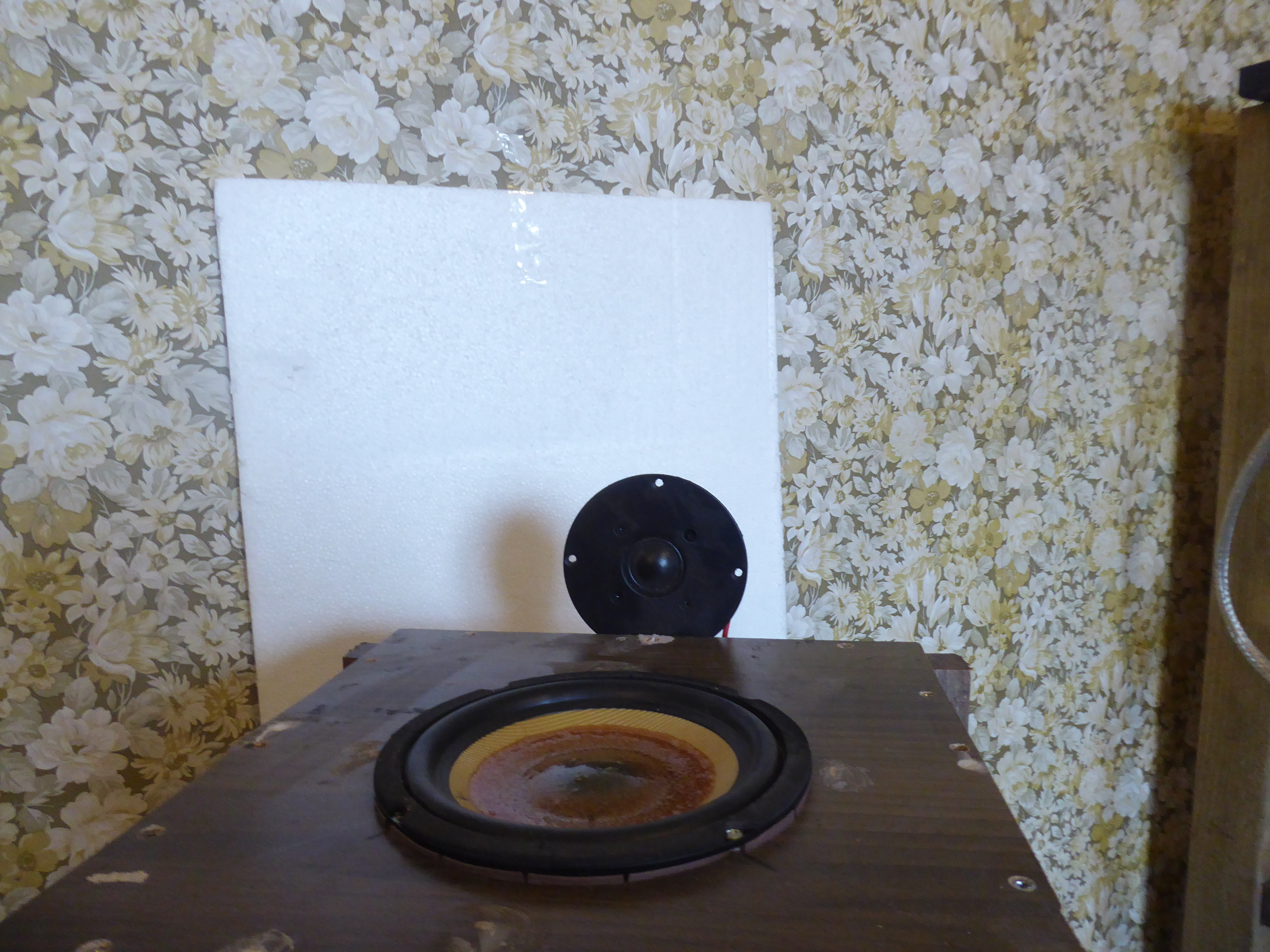 That sounded awful with the tweeter being too loud. Just goes to show that even with up and down firing mid bass they are not matching the tweeter's rating of 90dB. That might be different if the mid bass were point and squirt but they're not. A got a 8R2 resistor out and wired it in the tweeter circuit. That seems about right. When i used a single tweeter before the resistor was 12R.

The tweeter is a lot further back with this arrangement and I think it might help with time alignment but it is hard to know for sure as I have made the cardinal sin of doing too many changes too quickly and only listened to a couple of albums between changes.. What I do know though is I am not going back to a single tweeter speaker. The clarity and extra detail brought by the four tweeter arrangement is very much missing with this single tweeter effort.

So, back to the four tweeter pod it is. I was hoping I could get away with a single tweeter for simplicity but it isn't going to happen. The only other way to do it is to increase the order of high pass filter but that is not going to happen and couldn't at line level anyway.

I wonder what is the point in wiring the mid bass in parallel when I also have to change the tweeters to series parallel to balance things up.

All I am doing is making things louder and the amps are doing more work but not any less than if I were to level match with mid bass in series and tweeters in series.
DIY inspired by Richard "The Doc" Dunn RIP
Top

Swapped in my bipolar 30cm cubes with 5.25" drivers for a listen. Even when bipolar and up to the wall they are very very slighty bass shy. The enclosure is slightly too big. Need to put a small bag of sand inside each one and see if that brings the bass up. I can't get them any closer to the wall.

Apart from that they sound marvellous and I can tell the difference the line level high pass has made with these more than the 6.5 inchers. They make me aware that the bipolar 6.5" enclosure is too small, even when aperiodic. Good job the enclosures I have planned with the oak tables are going to be a fair bit bigger than the cabs they are in now.

I have read that bipolar speakers need to be away from walls. I suspect that is because traditionally bipolar have drivers on the front and back and you don't want rear facing drivers near a wall. I found that out when I tried rear firing tweeters. The only other reason I cabn think why they should be away from the wall is because of the baffle step compensation they provide - making the bass too prominent. Well that doesn't happen with these 5.25" up and down firing dipoles, I have them as close to the wall as I can possibly get them.

It's a different story with the 6.5" version but That is because the enclosure is too small. I look forward to getting them in a larger cabinet. Maybe they too will work right up to the wall.
DIY inspired by Richard "The Doc" Dunn RIP
Top

Stuck two litres worth of 3" square fence posts inside each 5" bipole speaker to try and bring up the bass a bit. And it has

Still needs a bit more though

I always thought with sealed box there was some leeway with box volume. Well there is but not this much

It is very important to balancing a speaker properly, as I finding out now. No more back of fag packet calculations although in my defence I don't think the published specs of these drivers are to be believed plus adding dope changes the ones we use to work out box volume (Fs, Qts, Vas).

It has made a big difference in the overall character of the speakers. Going to add some more until the volume is twice that of a Cube3 speaker (two drivers instead of one). I stupidly assumed that by going bipole with this driver that I would need to add a bit on because of the baffle step compensation that bipole provides and my eagerness to get the speakers to work right up to the wall.

My next job is to rewire the 5" bipole so I can triamp them . It's turning into a lovely speaker for low to moderate listening in a small problematic room like mine. A sacrifice to the room mode gods was required. This speaker is just about finished.

But the 6.5" version isn't finished. A small enlargement of the box is required.. Will do that by adding a few centimetres to the height with some small planks of 20 mm thick softwood. It's not gonna look good but then they don't at the moment. It won't be a cube either but not far off and I can't be arsed to build another pair of crap chipboard cabs.

If I can get the 6.5" bipole to work back to the wall then that will be the winner and the one I go with.
DIY inspired by Richard "The Doc" Dunn RIP
Top

5" bipole cubes are now wired up and playing.

Playing Supertramp Breakfast in America which is a superbly recorded album. Loving it. My best speaker so far. Steel lined cabs are really doing the business and the four lengths of fence post I put in to reduce the volume are making the lower baffle very solid.

I have perfected an improved way of mechanically linking the two driver's magnets. Before I was using some black plastic fall pipe with holes cut in the sides. This new method involves a 10cm length of32mm square hardwood with four screws in each end. They are spaced about in the corners to provide stability when I stand it on the down facing driver's magnet and so the pole piece vent is not blocked (increases Fs and we don't want that).

There is a 132mm distance between the two magnets. 100mm is the length of wood and the rest is taken up by the screws - 16mm at each end. The screws provide for fine tuning of the length as it has to be just right and they transfer vibration between the two drivers.

This is much better than the holy drainpipe method. The reduction in cabinet vibration is quite astonishing, I can hardly feel anything on the baffles or the side walls . Very strange when you are used to crap chipboard humming along to the music. This is fantastic and just goes to show that the harder you couple the back of the two drivers the better.
DIY inspired by Richard "The Doc" Dunn RIP
Top

Well done Stu, I don't always understand everything you do, but hopefully I get the gist of most of it`. I'll have a drink later to your success.

If the bipole 6.5" doesn't sound as good as the 5" version then I won't be sad. Size isn't everything

In a small almost square room you have to be careful with the bass. Modes can ruin an otherwise perfect (for me) performance. Getting the speakers close to wall is also important and so care is needed with bass loading.

You're all going to be sad when I get this finished

Hey Stu
Hope u have been busy today.
As u know I follow ur activity and mimic where able.
I’ve gone back to a single tweeter above n behind the up firing mid bass- couldn’t get the pair to work and was scared about the load on the amps. I think the best way forward for me is additional amps for tweeters- got to get soldering 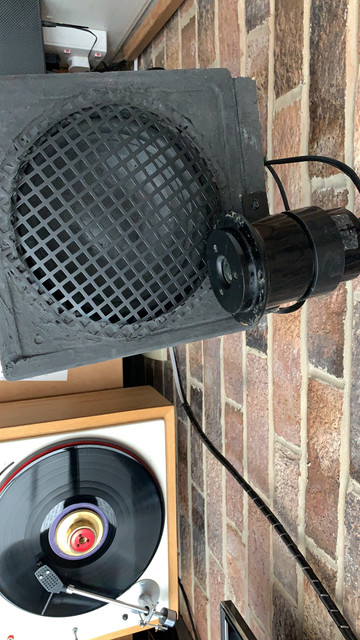 The tweeter cube U have is the only elegant way otherwise it starts to look like an alien.
I have started a final build but halted till I get the driver interaction correct. The new speaker will also house the amp in its base- hidden

What were the exact problems with two tweeters? You had them both pointing forward didn't you ? Comb filtering 7 probably an issue with that And wired in parallel? I've had no problems with a four ohm load but it does mess with the balance between mid bass and tweeter.

Tweeter behind mid bass is definitely the way to go. My tweeter cube was a way of getting them all as close together as possible and get them behind the mid bass. The rounded edges of the dice also reduced diffraction and the improvement was substantial.

Hoping your enjoying messing about with speakers. Best way to learn is to do