DIY thoughts of the day

Just wrapped some around the rollers that feed the wire into the hose. Lets see how long it lasts before I have to replace the duct tape

karatestu wrote: ↑Thu Mar 11, 2021 5:29 pm
Then we get on to the expensive bit which is stepped attenuation. Some of the prices are eye watering for the kit and ready built versions. Some of the resistors are very pricey especially the Audionote silver tantalum non magnetic jobbies. Can't afford them. I don't want a kit or ready built for reasons I will explain later so had a look at switches first. One or two pole ? That would mean choosing between stereo and mono. I can't decide yet, still torn in two about that. Do I want two volume controls? Could be handy for any balance problems I suppose but two mono switches cost more than one stereo switch.


Having done more than a bit of experimentation on this, can i suggest you avoid silver plated contacts that aren't sealed from the outside atmosphere. Silver oxide might be conductive, but it's still worse than hard gold plate. Grayhill make great switchgear.

No, you don't want 2 volume controls. It's awful, even when ganged together, unless you do it like this, in which case you loose simple balance control. 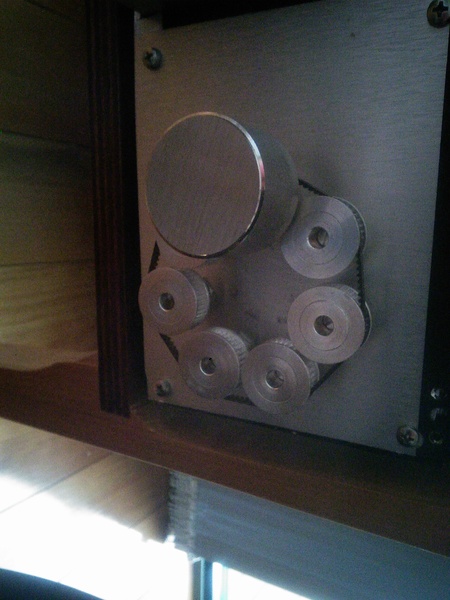 While you are at it, you might as well buffer the output from the volume control. I use an uber linearised emitter follower (zero gain) after a switched attenuator in my preamp. You wouldn't want the input bias current from, say a BC182 flowing back into whatever volume control you've chosen. That just causes all sorts of issues, especially long term and the DC output voltage wanders up and down the volume control position, causing high sensitivity speakers like mine to flap about alarmingly.

I haven't bought a stepped attenuator yet, been too busy faffing about with speakers and power amps

As to introducing a buffer is concerned- I would only do it as a last resort . Adding components goes against my less is more philosophy (which I borrowed from RD).

karatestu wrote: ↑Sun Jun 27, 2021 7:23 am I haven't bought a stepped attenuator yet, been too busy faffing about with speakers and power amps

As to introducing a buffer is concerned- I would only do it as a last resort . Adding components goes against my less is more philosophy (which I borrowed from RD).

Yeah, most of the time less is more, but occasionally more is more. Here is an abbreviated version of my voyage.

I 'discovered' high efficiency drivers. Ones that have obvious frequency response issues yet make most others sound quite sleepy.
The main issue with these drivers is that they make everything MUCH louder, including things we don't want, like noise, hum and switching noise. So i embarked on a journey to minimise this. Now NVA amplifiers are pretty quiet in most respects, but that damn volume control (direct coupled cermet) caused me no end of headaches. It was fine with normal speakers, drove me nuts with these ones. I'd turn off the amp and vigorously wind the knob up and down to make the things temporarily quiet, but within weeks it was noisy again and the simple act of altering the volume caused massive cone movement. WTF? It sounds amazing as long as i leave the volume alone?

Anyway, i noticed that there was a rather large amount of DC present on the outputs (I was using an AP70 at the time), so investigated. There isn't anything to adjust on these amplifiers, so to cut a long story short, it ended up being caused by unequal currents through the differential input pair. The base of these transistors needs have the same DC operating conditions at all times. Differences in the AC current are reflected in the output and that's the way it's meant to work, but differences in the DC current are also presented to the output. OK so what is causing this difference? A different resistance to ground it what finally dawned on me. The input bias current is flowing back out through the base resistor, into the volume control wiper and down to ground. THIS is what causes the volume control to become noisy and whenever you adjust the wiper position, you are adjust the DC operating conditions of HALF of the input pair. Result, DC offsets all over the map. Not enough to worry a normal speaker, but enough to cause craziness in mine.

I ended up putting a wima MPP cap after the pot's wiper, which immediately solved the issue and i couldn't hear any issues with that (which was a relief, as i hate the sound of electrolytic caps). I stayed like that for a while, then i replaced the cermet pot with a switched attenuator, which is much better, but i'm not all that taken with only having 24 or so different volume steps. I like to keep the maximum volume presented to me under strict control, too loud and my ears distort the sound, too soft and i feel like i'm missing out. Anyway...

I moved onto an active crossover (begone foul passive crossovers), and so ended up using a separate box for volume and switching, now driving 3 power amps, so 1/3 the AC resistance, 3 times the load. Now i could just adjust the input impedance of all these amplifiers, necessitating much phaffing about with the DC operating conditions of the input pair, or i could just buffer the output of the volume control, which would also have the effect of presenting a nice DC bias on the output capacitor. Much easier to buffer the output. I eventually hit on a buffer composed of 4 of the same transistors, 3 of which are linearizing the other one. It's zero feedback and only one stage long. It sounded better when i installed it and when i tried to measure it, distortion and noise when down compared to loopback conditions (which just means that what i was measuring it with could be better).

Interesting story Rex. Luckily (or unluckily) my heavily doped drivers are nof particularly sensitive. Unless a problem becomes audible I will be in blissful ignorance

At the moment I don't have any audible problem when changing volume. Mostly because I can't change volume

due to having a soldered two resistor potential divider in each channel.

Did I mention I was a practitioner of minimalism

Just in time for Christmas

Here's the original before surgery 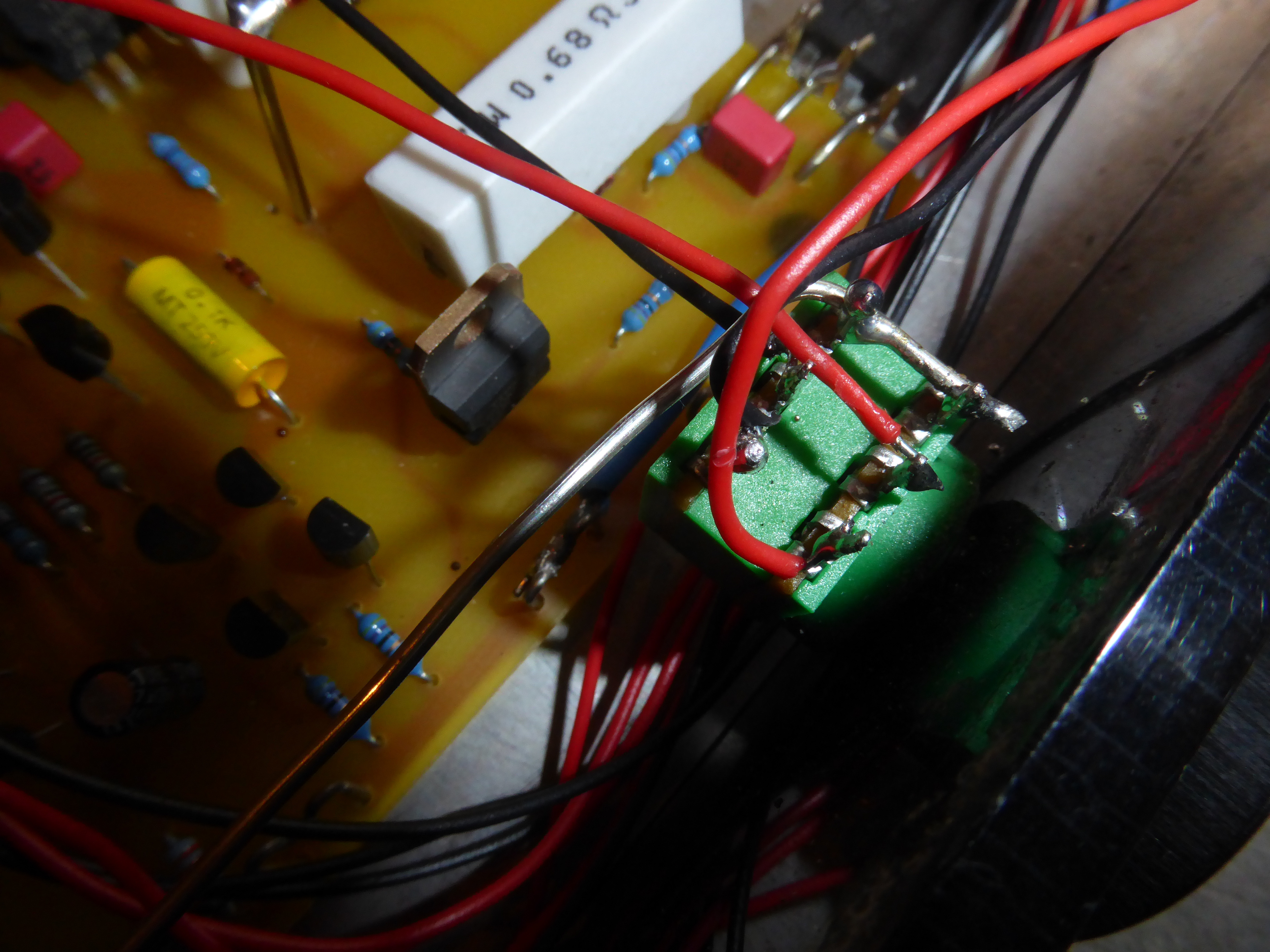 Here's the old green one and new TKD 10k next to each other. You will notice the pins are much closer together on the TKD and the threaded section of the shaft is not as long. 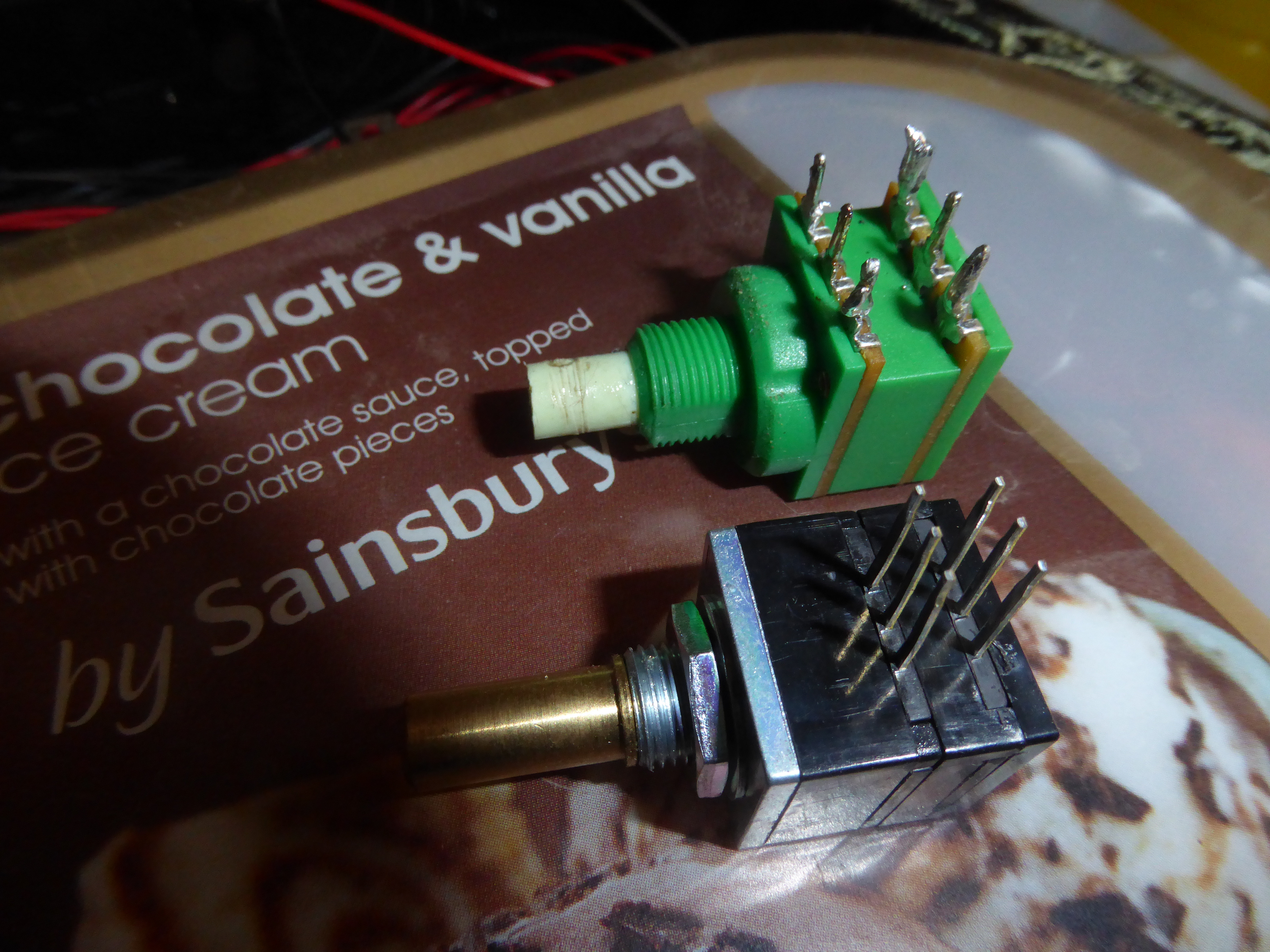 I bent the middle pins a bit to make soldering the wires on easier. 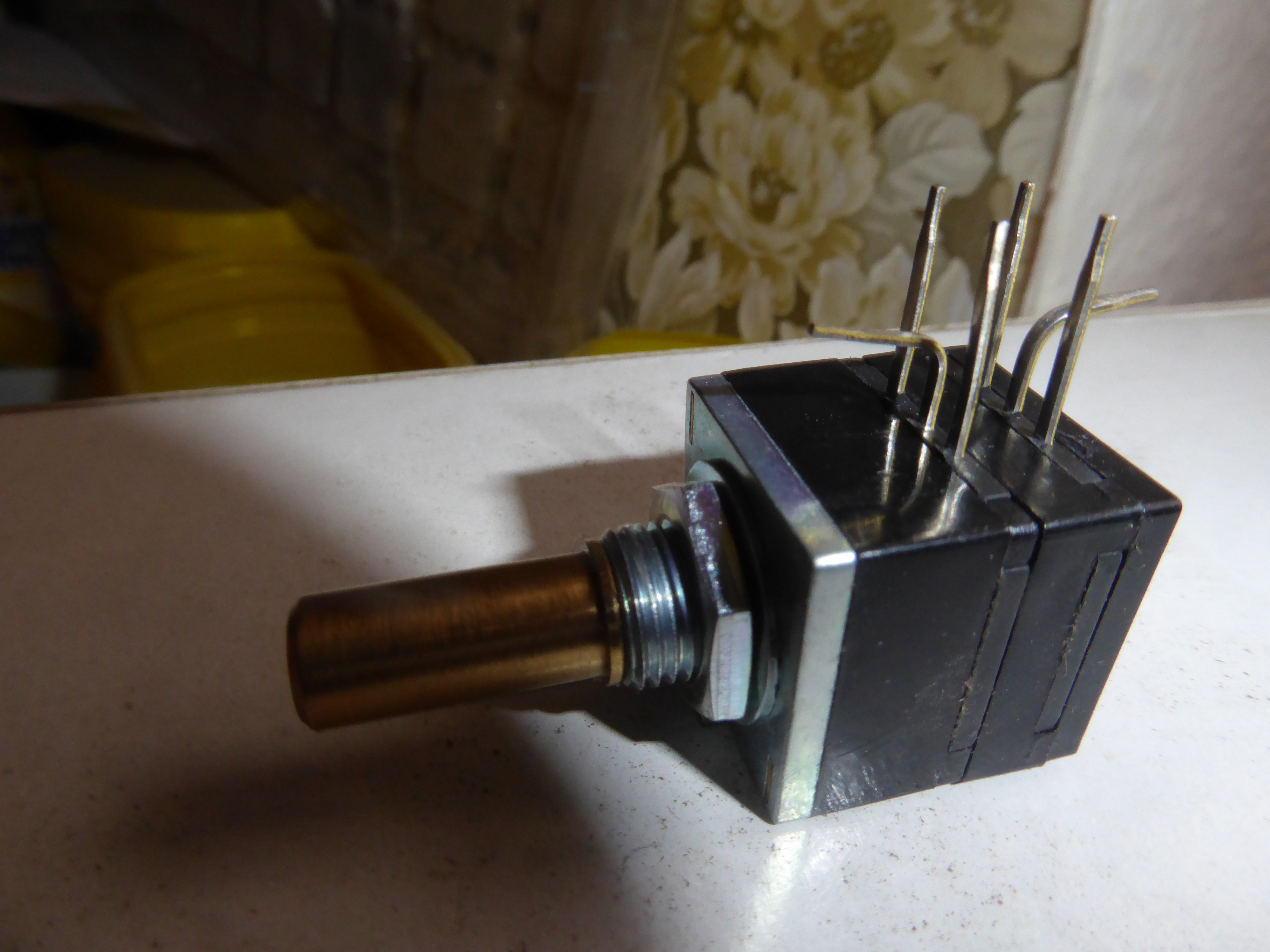 Here is the TKD in place. Anybody putting this pot in please be aware that the threaded section of the shaft is only just long enough to get the nut on. I had to remove the washer and file off the tiny bit which sticks out that usually goes in an indent to stop the pot spinning.. Anyway, it's in and very secure 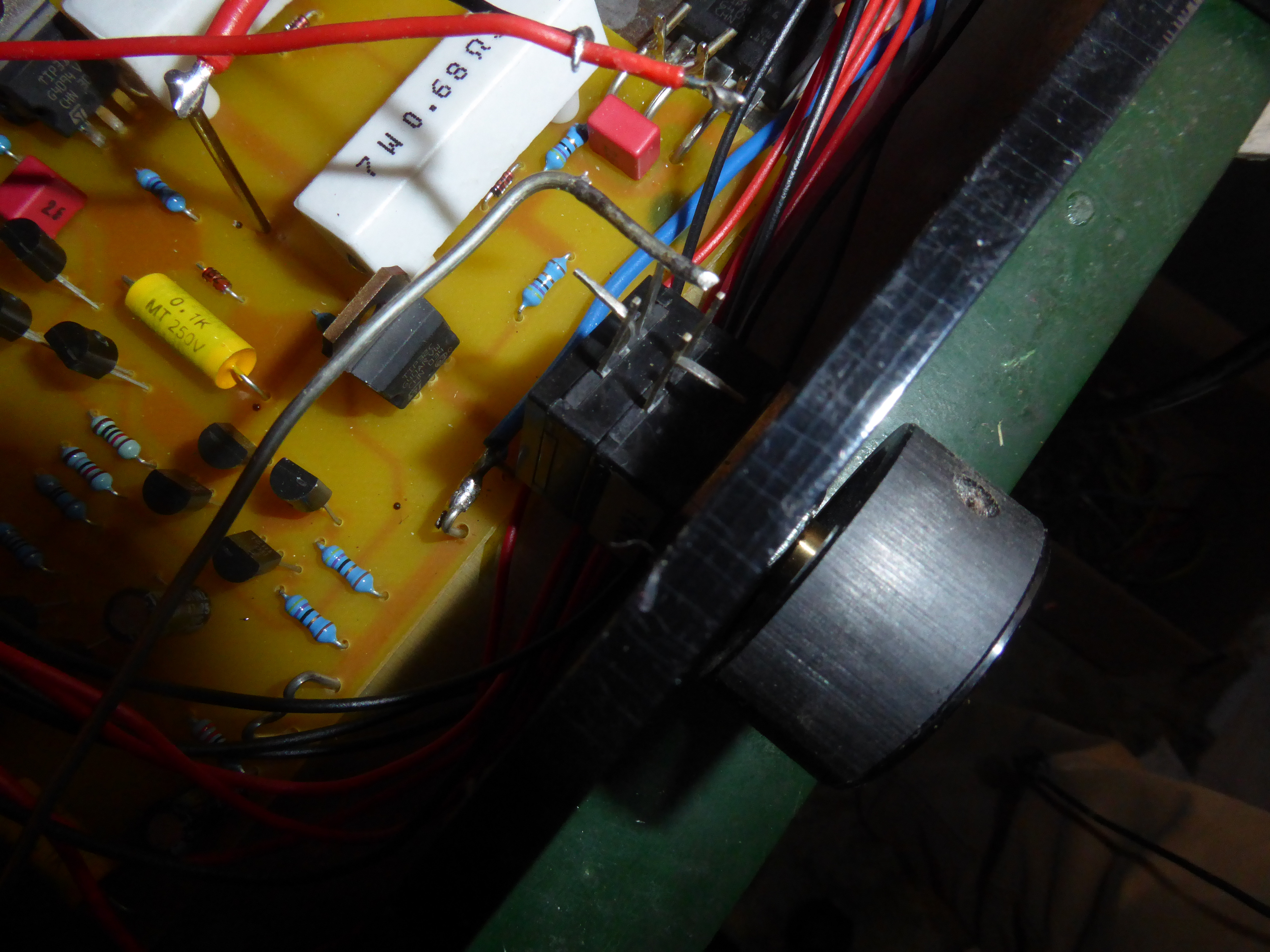 All soldered and ready to go. 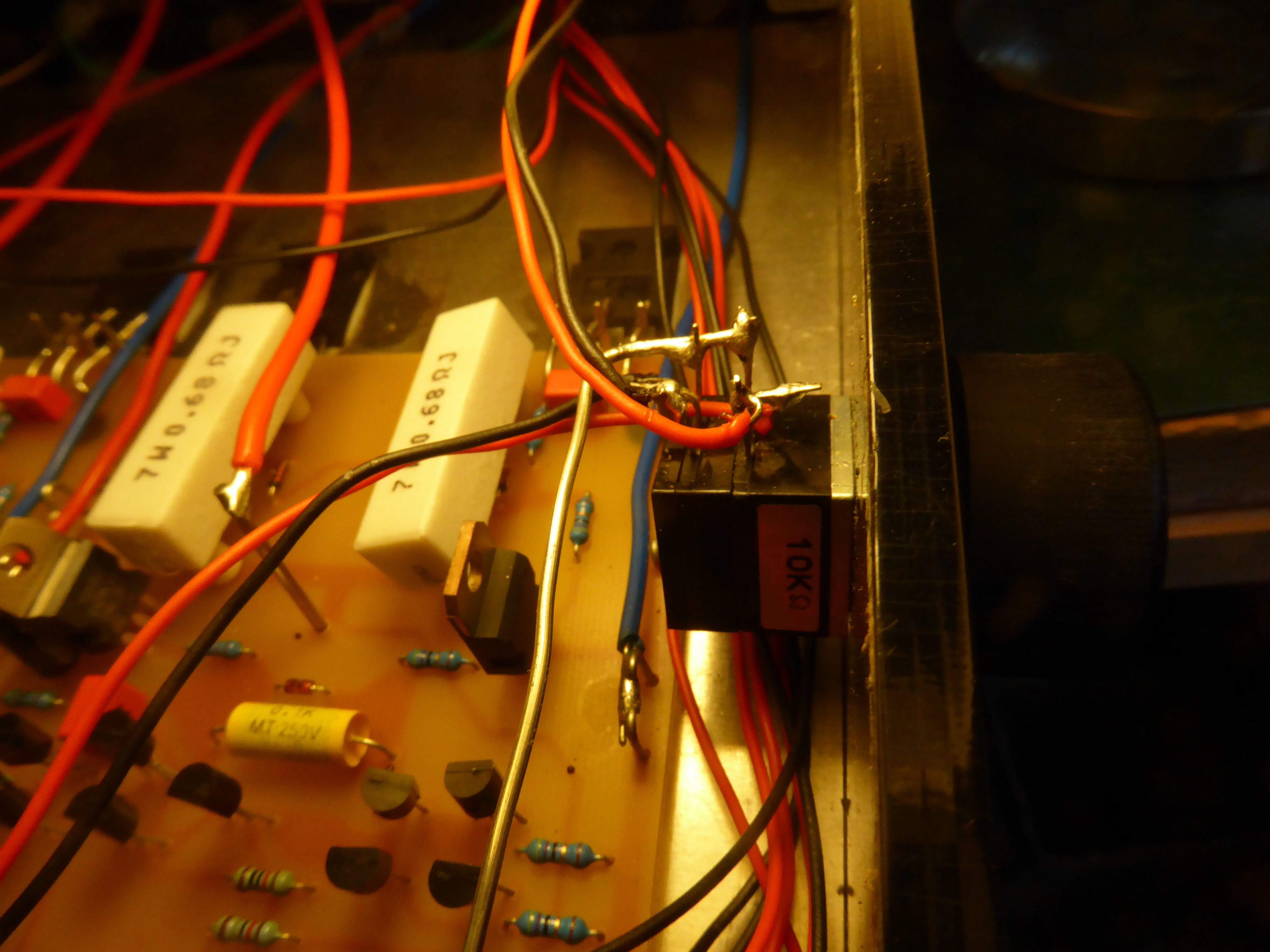 Just going to listen to it now

It sounds very good I must say. More detailed than the last one. The action feels superb, I can't stop playing with it

The channel balance at low volume is superb. That was the only problem with the old one.

The 2cp601, great pot. The 2cp2511 big brother to it is superb, double the price though and certainly wouldnt fit in there

Yeah, I'm well pleased with it. It has been a nice little upgrade for the little AP20. Silver wiring next I think

I may give the 2511 a go in something else that has more room.
DIY inspired by Richard "The Doc" Dunn RIP
Top

We are testing a couple of modified versions of the TKD pots for our new integrated amp. Let me know how you get along with it in your AP20, Stu.