I'm not sure if anyone will be interested in this but here goes...

I've been into the Logitech Squeezeboxes for a long time, having three SB3s, a Duet and 2 SB radios. (I never did get the boombox or the touch) The "Transporter" was always the one lusted after and way out of my price range.

Things have moved on and Logitech dropped the ball and I found a guy on Ebay selling the Transporter "special edition" that doesn't have the twirly-wheel for a fraction of the original cost. I just couldn't resist. I know, it's old tech by today's standards but somehow the original urge to own one way back when won out. Of course the lid had to come off just as soon as you can say "stripped screw remover". 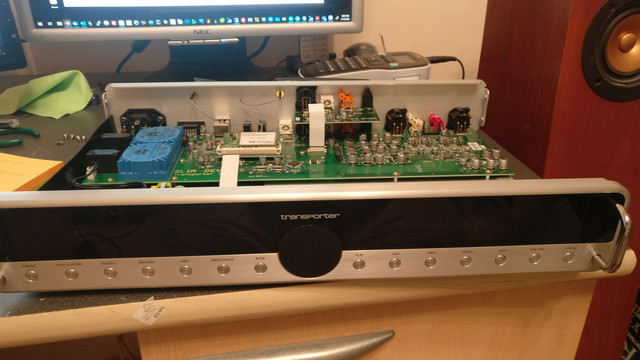 They must've put the screws in with one of those air-driven things they use for car wheelnuts!

Anyway, initial sound-wise this thing had potential and it has all sorts of interfaces including balanced and unbalanced analogue, SP/Dif optical and co-axial and AES/UBU in and out. Plus word clock input! I guess the clue is in the name "Transport-er".

So I listened to it for a while and thought, hmmmm, a bit jumbled and lacking in coherence. So that's when the idea to try experiments to see if I could improve it came along. The Transporter uses an AKM4396 DAC and looking up the datasheet I could see that they had simply used the reference line output circuit as-is with no changes. In fact the datasheets has two circuits, one for unbalanced and another for balanced + unbalanced. It was this latter one they have used. The downside is that the circuit is more complicated than it needs to be if you only want unbalanced and there are electrolytic caps in the path.

Anyway, I built a couple and tried them out: It was an interesting change to the sound and although was smooth and very laid back it wasn't my scene so back to the drawing board. Next up I decided to reproduce the simpler of the circuits in the datasheet, dedicated to unbalanced. Of course I made a mistake with the pcb desgn and had to bodge it but oh well..

The sound was now the best I've had from the unit. Very dynamic and exciting but not harsh or jumbled.

Then more reading the web and deciding to see if transformers could be the way forward? My friend had some spare cheap line transformers which he gave me to try out: The poor transporter was starting to look very abused by this stage! Anyway, the transformers brought a whole new level of realism in the midranges, voices really sounded fabulous, as did piano. Bass was a little light but expected from such small transformers. So at this point I took the plunge and bought some Lundahl high level line transformers from Sweden. These took a long time to arrive but they came last week and this is the final result: 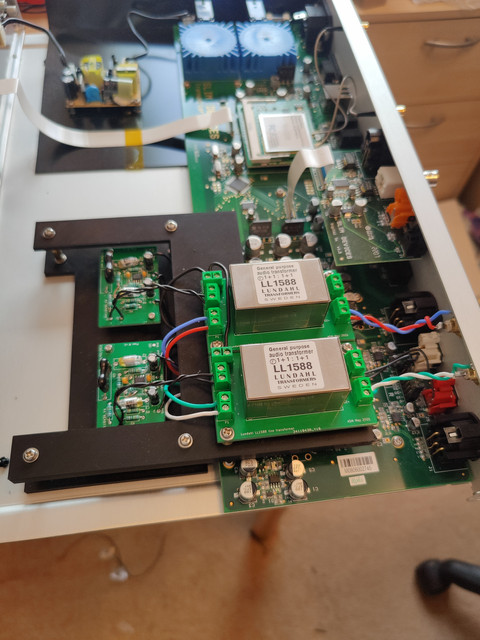 I now have two of the modes connected, the op-amp circuits go to the existing phono sockets (disconnected from the original cct) and the transformers go to a separate set of phonos.

The sound from the transformers is sweeter and more natural than that from the op-amp drivers but there is a "family" likeness that shows I have found the sound of the DAC itself (rather than the associated circuitry) and I will let it run in and test it out with all sorts of music.

It was an enjoyable journey and has got me back into DIY and electronics after a long drought period.

Nice work and good pics too!

I will second the nice work, but I could not help wondering why not the dac chip as well.
Top

It's a nice sounding DAC chip actually but now you mention it...hmmmm.

On a practical note though, the main issue with using the TDA1541A chip in there is the limited space. There's room for a pcb to house it and the power supplies and the I/V but it's the transformer that is the issue. I'd need 5 secondaries, 4 x 8v and a 15v. To do this in the space would need a custom toroidal essentially. If anyone knows where I might get a transformer wound for not too much money I might give this project a go! (Now look what you've started!)

Tony Moore wrote: ↑Mon May 17, 2021 10:53 am On a practical note though, the main issue with using the TDA1541A chip in there is the limited space. There's room for a pcb to house it and the power supplies and the I/V but it's the transformer that is the issue. I'd need 5 secondaries, 4 x 8v and a 15v. To do this in the space would need a custom toroidal essentially. If anyone knows where I might get a transformer wound for not too much money I might give this project a go! (Now look what you've started!)

You could try Tiger toroids

Toroidy are rather good, i had a new mains transformer for my phono stage made, and it was good value for money too

It's a nice sounding DAC chip actually but now you mention it...hmmmm.

OK, you really started something...

Never one to shirk a challenge...

I looked up some implementations of the TDA1541A DAC and of course Pedja Rogic is something of a master with this DAC, having done a lot of work over many years. I've also been using his first generation PCB for many years and love it so it was a low risk option to build on his designs that he generously publishes on the web for his earlier work. This is not finished yet but it is now up and running. I've used Pedja's design of power supplies from his AYA 2 DAC and for the I/V I've implemented his OPA861 circuit. Perhaps overkill but I can't skimp on a challenge. lol

I now have all three outputs taken out to phonos: Basic op-amp from original AKM DAC, Lundahl transformers from AKM and the 1541A outputs. Hopefully this might provide some amusement at a future meetup.

A quick update. I have now tried another permutation for the DAC board itself. After more research I found some advice on I2S attenuation and DEM reclocking so I decided to implement these as a comparison with the simpler arrangement. Also the "orange drop" capacitors for decoupling since the opinion is that they are good in this use. The chip in there currently is the "standard" A version but it sounds really amazing now. I'm not sure whether the improvement is based on the I2S attenuation or the change in decoupling caps though so I have another version of the board that I will build to try the Wima caps in comparison.

I am starting to sound really obsessive now. lol.

But how else to know which is best? It is relatively easy to swap out these modules and isolate parts of the circuit and components to find out if and what might affect the sound.

I am very pleased with it so far though.