Having taken the headphone amp out of the main rig for now I suddenly missed not having the possibility to listen with my NightHawks. Then my thoughts turned to using one of the spare USB sockets on the back of my streaming PC and attaching a USB / DAC / Headphone unit.

Lying around is a long-unused 5m Supra USB cable and I thought about hooking that up with the AQ Dragonfly on the end - only trouble is that the USB connections aren't the same. Next thought, I can use the Roland UA-25ex which is a sort of multi-purpose guitar / midi / USB interface thingy that also hasn't been dusted off for a while.

Put these in place and fired up Volumio on the PC. The selection process meant that I had to restart the computer so it was talking to the DAC, and then things went quite well. Nice-ish sound, a bit grainy but I know that the Roland unit isn't built for audiophile use - a musician's tool that needs to be accurate rather than pleasant.

Pondering further, I then put the Supra cable into the Oehlbach Masterclock and tried again. Stunning!!!! Really great SQ with a huge soundstage from the NightHawks and a sumptuous, crystal-clear sound. I put this down not only to the Masterclock's regen but also the fact that it drives the DAC with a fresh, clean power-source. Also handy is that as the DAC is on the end of a long cable, I can put it beside me and have easy access to the volume control. Convenience and laziness combined.

Now for another dose of the Rush catalogue....

Fretless, I thought that you had shciit hp amp in use?
Rega by Michael Lim\Teac\NVA\
SA Mantra30\Audio Technica ATH-A900X
...the Gods you worship are steel, at the altar of rock 'n' roll you kneel...
Top

You know me Firebug. Love to chop and change things.

The Schiit Magni3 is now in the lounge where I have a mini headphone rig to protect my brain-cells from the mind-numbing effects of soap-operas, sitcoms and reality shows on the TV. 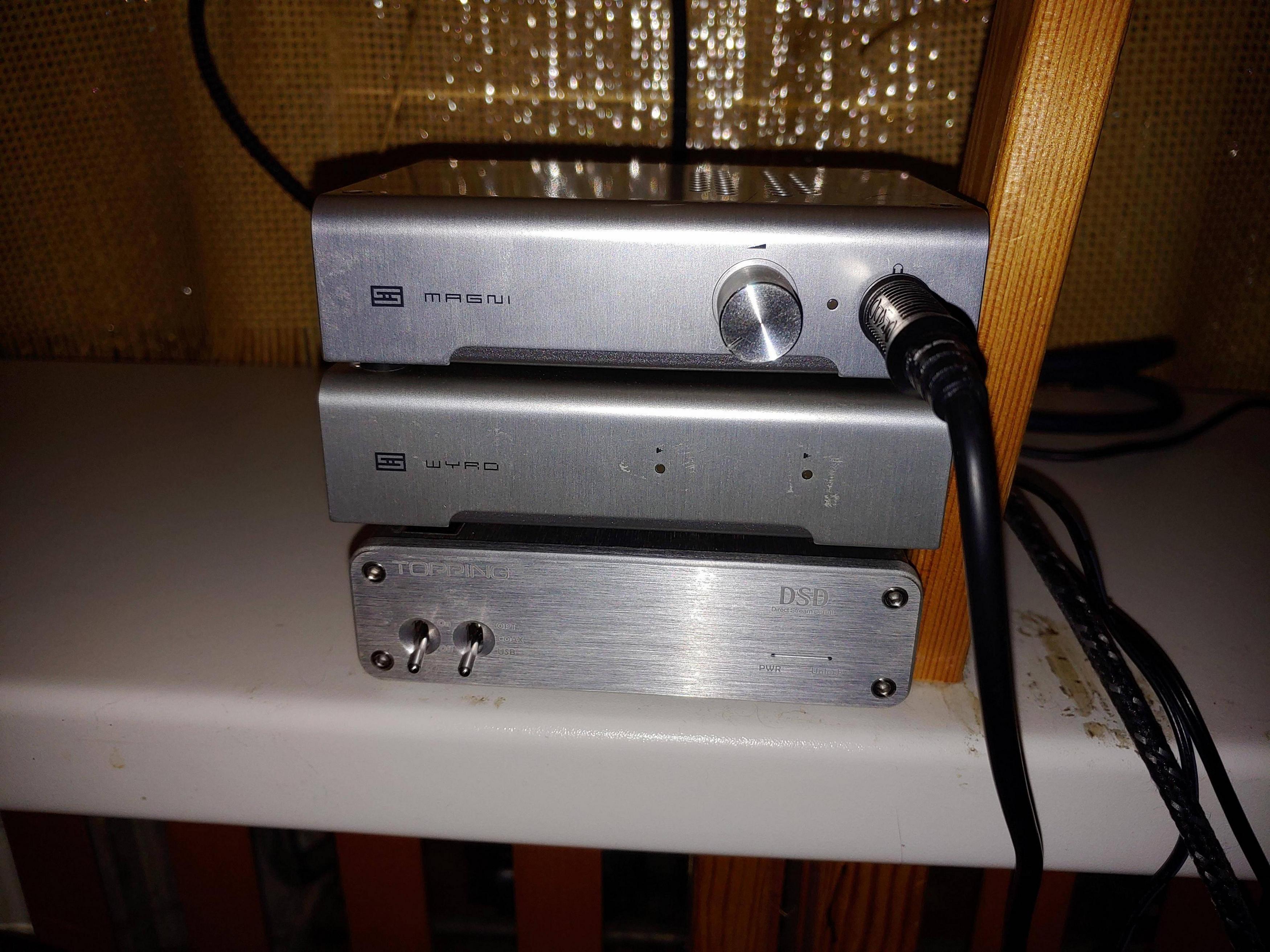 To answer Antonio. The fact that the Masterclock provides a better power source for the USB DAC makes a big difference. I have noticed this also when I plugged the AQ Dragonfly into it. Probably to do with having extra wattage to drive the headphones properly.

Just seen this link om pfm and I have to say I like bloke who does these videos, very enthusiastic and seems honest enough, does great dem videos also: Vhttps://www.youtube.com/watch?v=s_on8Kih28k
Top

antonio66 wrote: ↑Mon Jan 25, 2021 3:23 am Just seen this link om pfm and I have to say I like bloke who does these videos, very enthusiastic and seems honest enough, does great dem videos also: Vhttps://www.youtube.com/watch?v=s_on8Kih28k

I visited his home a few years ago.

Yes he is a nice bloke.

However his tastes and needs when it comes to hi-fi are rather different to mine.

His room had big acoustic problems with echoey bass. So much so that him turning on his DSP made a very significant improvement to the overall sound.
He is unable - domestically speaking - to house the sort of speakers that I use in my home.

He was not into 2nd hand equipment nor DIY.

I think he was disappointed when I told him that I thought his (over £10k system) sounded good but that it wasn't going the last bit to become a really good system. In that the final bits of realism were lacking in turning it from sounding like a hi-fi system to sounding like actual musicians in the room. I thought that his KEF ref slimline ported £multi thousand speakers were the area where he could get the biggest improvement - especially if he went for sealed box or high efficiency speakers.

In the context of someone not into 2nd hand nor DIY and looking to buy brand new from a dealer his reviews are useful.
He does put a lot of time and effort into his videos.

I think he'd be quite open to someone visiting him with gear for him to evaluate. Especially if it was different to what he's tried before. EG an NVA stepped attenuator pre-amp with an NVA power amp.

Disaster, of a sort, struck this morning as my main streaming PC suddenly refused to emit any signs of life. Got it to the local PC repair shop and they think it is a fault in the internal power circuits.

So - the Asus Tinkerboard is back in the main rig and it is interesting to compare against the 'big' PC. The major change since the TB was last here is the move up to DH Labs Mirage USB cabling and the sound is big, punchy and exciting.

What I am missing is the sharp-edged imaging and rich smoothness that the PC brings to the sound. A wider soundstage that is free of the boxes.

That said. The little Tinkerboard is doing a great job and producing thoroughly enjoyable music.

Dead PC = power supply or motherboard. It's usually easy to have a very good guess at which it is by the exact symptons of how the PC is dead or how it died.

PC's are easy to fix. There's only 6 or 7 different components inside them. And 3 of them rarely give any trouble (the RAM, CPU and CPU cooler).

Sites like PCpartspicker are great for checking compatability between components.

So the ex-hospital E-Medic PC is back from the repair shop and what did they find? That the large outboard switching PSU was fried, which is why nothing was working. The Lockdown being what it is, a replacement unit was impossible to acquire and so an improvised solution was conceived - a standard PC internal power-supply that they had in stock could be piggy-backed onto the E-Medic's outer casing and that should fix the problem. 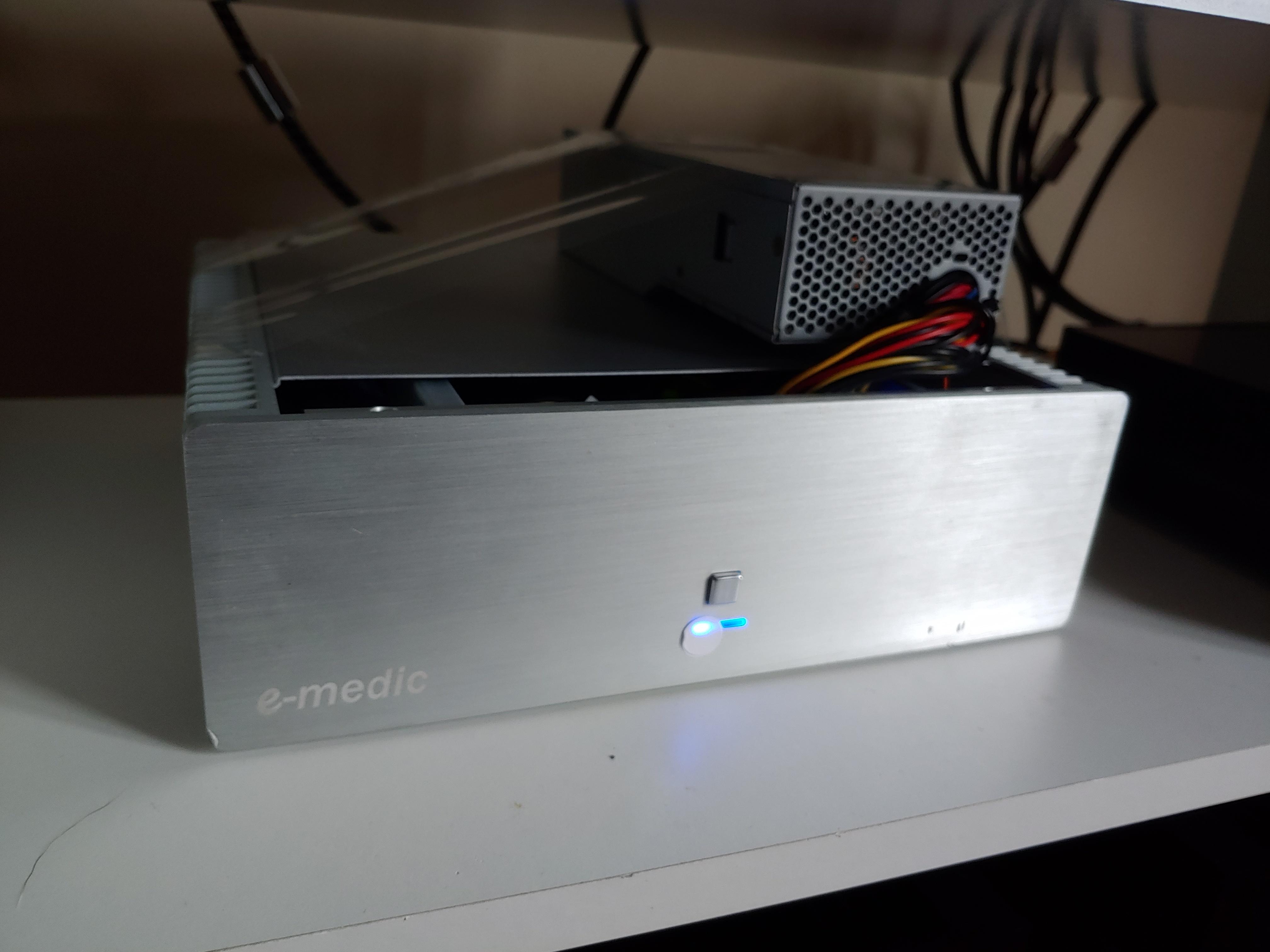 So here it is, pretty it ain't but it has an appealing DIY look to it which means that the average high-end audiophile will break out in a fit of hysterical laughter ....
... until he hears it.

But this story isn't completely over. Having been told that this was a transformer rather than a switching PSU I plugged it into the BMU and sat back, curious to see what the result would be. Well, it sounded okay, slightly fuller and richer than the Tinkerboard that has been in use for the last few days - but the usual magic was missing. Hmmm.

So I tried shifting the power lead to a non-BMU socket and then the sound blossomed into the full majestic dynamism and detail this converted desktop can display, in fact it might even be sounding slightly better than before. A winner!

Happy with things back into proper operating status I had another thought: the BMU isn't suitable for everything and my eyes strayed to the seldom-used Cambridge CXC CD Transport. Time for an experiment comparing the electrons from the BMU to those from an ordinary domestic socket. And whaddayaknow, it sounded better on non-BMU electrickery. Not a lot, but noticeably fuller and better defined. The TeraDak DAC was next for the same test. This has a chunky, second-box LPSU and that did respond favourably to the BMU, with the DAC being more refined and comfortable.

The moral of this tale is don't just plug anything into a BMU expecting it to automatically sound better - it might not.

One possible drawback with the new PC PSU might be ventilation noise as there is a motorised fan in it - although this only comes on when the power-supply starts to run hot. Hasn't kicked in yet, so we'll see what happens when it does.

Another side-effect of this temporary shuffling of equipment is that other installations have now received a new configuration and a completely new headphone setup has been realised.

More another time. Got to listen to some music.