A continuation of my DIY digital audio adventures from the 'Life of Pi' thread.


Following Slinger's example, I have decided to move on up to the 'next level' of dedicated music-streaming micro-computer devices: the Asus Tinker Board. 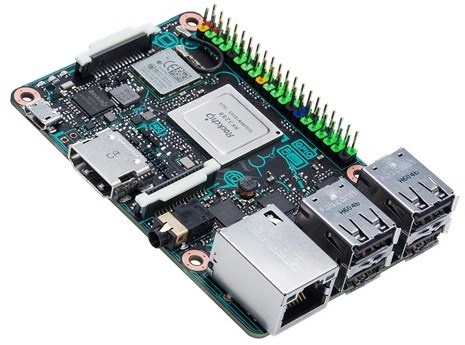 Okay, I'll agree, it does look remarkably like a Raspberry Pi. And that is intentional as it is meant to fit into Pi casings and be compatible with (some) Pi add-ons.

So, my Tinker Board S has arrived today along with an Inakustik Excellence USB cable (more on that another time). Pricewise, the Asus is about 90 euros, roughly the same as a Pi plus Hifiberry Digi+ PRO. The Allo DigiOne Signature alone costs more than twice that amount.

Had a spare plastic Pi casing handy, there is an official Asus aluminium one on the way. A hefty heatsink block comes with the board and needs to be placed onto the CPU chip with a self-adhesive strip. You notice that this board is more solidly constructed with far more components than a Pi board.

A pre-prepared microSD card with the right version of Volumio loaded got popped in. Then hooked up the Tinkerboard in place of current resident Pi & Allo DigiOne Signature. Running power from the Tomanek LPSU and the USB plugged into the Teradak Chameleon.

The higher-spec Asus unit showed its superior number-crunching abilities immediately as setup went smoothly, finding and loading the music library on my NAS. But then the hiccups started. It couldn't find the DAC.

A half-hour of irritated panic ensued but finally it seems to have sorted itself out. Similar to the Pi/DigiOne SIG, you need to turn the DAC on first and then the Tinkerboard.

At last there was music!

I'm not sure if the AQ Jitterbug was causing a problem, but things don't seem to work to well when the USB cable is plugged via the filter. However putting the J-bug into another socket alongside the Inakustik lead was no trouble and seems to help SQ slightly.

First impressions on SQ are very promising. The sound is meatier, more organic and immediate. There is the sense of an extra dimension of solidity/realism over the Allo, but I will have to do some proper comparisons soon.

Another niggle is that the connection doesn't like my 24bit music files, it started churning out some nastily distorted mush when I tried to play some. Went into the options in Volumio and set 'Audio Resampling' on with everything being kept to 16bit. Works fine and sounds just terrific at the moment. This might just be specific to the Teradak's use of old-fashioned 16bit TDA1543 chips.

I have high hopes for this combination. The Teradak processes USB input in a completely different way to SPDIF, converting the datastream to I2S and reclocking it. Also the Tinkerboard has far more processing power than the Pi, is designed with audio/media streaming in mind and has a USB bus that is separate from other systems.

Next problem. If the Tinkerboard stays in place, the headphone side of the main system will need to be changed considerably.

This combo is making wonderful music! Things are warming-through now and it really is a step-up.

I never really took USB audio connections that seriously but this is proving me wrong.

Now, a truckload of detail and performance that I honestly have never heard before. Detail and separation to die for.

Nice one Frett, always good to hear what you're up to. File based music is still a mystery to me but i enjoy reading about it.

karatestu wrote: ↑Wed Dec 18, 2019 6:43 am Nice one Frett, always good to hear what you're up to. File based music is still a mystery to me but i enjoy reading about it.

The USB connection to the DAC is less straightforward than the plug&play SPDIF coax and Toslink. Perhaps this is also why the SQ could be better. Instead of just receiving an audio data stream, the 2 devices are talking to each other and passing information back and forth.

The Asus Tinker Board (ATB) really does offer the simplest (and i.m.h.o. the best) path to setting up your own streamer... even if I don't use mine for streaming as such.

I've gone from using my PC along with JRiver to the ATB, via the Raspberry PI. Due to using JRiver I'd already ripped the huge majority of my music to disk so it wasn't too big a step to dump it all onto an external NAS disk (I'm using two now, one for "modern" and one for Classical music) and hook it up to the Pi.

With the Pi I got into researching and editing the Volumio "config.txt" file to actually throttle the power back, shut off the HDMI, anything that might improve the sound through tried and tested hacks that other people whose knowledge I respected had made. Loads of geeky fiddling, and I do enjoy a bit of geeky fiddling.

Is that working with your SMSL DAC, Slinger?

I've now run into a couple of hitches with the Teradak models and USB compatibility.

I've been using one of these... https://www.aliexpress.com/item/33046930802.html for a while now, although the pics don't actually show the xmos USB card, just the stand-offs for it.