There & Back Again: A Hobbi...Headphone Lover's Tale

There & Back Again: A Hobbi...Headphone Lover's Tale

It's obviously been a while since I have submitted anything substantive here, and time flies. For the last 3 years or so I reached a state of contentment with my main system and felt no need to change anything; I've just enjoyed it. I still feel that way today, it's excellent. Over that time I have also enjoyed listening to music on headphones and that system has seen a number of modest improvements. More recently, my interest in listening to music with headphones and improving the performance of my headphone system has increased considerably and is now the main focus of my plans.

I have began a substantial upgrade of my headphone system, and have created this thread to act as a repository of my thoughts on various component choices and my successes and failures in putting together something compelling. I thought some of you might find it interesting to follow along. So my friends, pull up a comfortable chair and come with me...

I know how much thought and effort you put into matching your equipment. Looking forward to seeing what you get up to now.

I've just sat for an hour writing an update to this, and the forum logged me out when I tried to post. I shall have some dinner, and if I can recover from the trauma, I'll have another go later.

I've had a headphone system of sorts since I was first introduced to NVA. The nature of the chain and quality of components over the years has changed as all such things must, but at various points has seen the NVA AP10H, Metrum Acoustics Aurix and Musette, AudioQuest NightHawks, Auralic Aries and Lumin D2 all contribute in service of the seemingly never-ending quest for audiophile nirvana.

But this story does not begin there. We shall instead take a considerable leap forward in time to 12 months or so ago. Having tried various headphones with the system as it then was, I decided to try Sundara after reading a plethora of positive reviews and owner feedback over at HeadFi and similar forums. It is a choice I shall remain eternally pleased to have made, as it has opened my eyes (and ears) to the quality of sound that competent headphones can deliver. Sundara are supremely comfortable, the pads are replaceable (and indeed a thriving market exists for aftermarket pads that have varying impacts upon presentation), and they deliver a consistently detailed and enjoyable experience. For £300 they are a genuine steal, and I encourage you to try them if you haven't yet had the opportunity to do so.

Of course, the addition of more revealing components to a system often highlights deficiencies elsewhere, and such was the case here. The Metrum Aurix is a fine Class A HPA, but it was lacking detail and clarity. Plenty of power was on offer, but for me it felt a little soft. I started to research for a suitable replacement and quickly became aware of the THX AAA 789. I should just add at this point that I am not sure how I feel about the issue of electronic measurements to define component competency in our hobby, and that's perhaps a discussion to be had in another thread on another day, but I'm aware that the 789 measures very well.

It was duly purchased, shipped and unpacked. I can't remember the exact price now, but feel that it was around the £200 - £300 mark.

It's fair to say that the 789 was another significant moment on this journey for me. It offered such an elevated level of performance over the vastly more expensive Metrum Acoustics Aurix that I really couldn't believe my ears. By any measure it was superior. The background is just inky black; no hiss, no noise of any kind - between tracks, and even during tracks between moments. It's startling to experience. The soundstage was laser etched into auditory space and the detail was there by the bucketful. Initially I was using SE with the stock cable, but decided to reach out to Periapt in the US and had them make me two 2m cables, one SE and the other balanced XLR.

There is a wonderful synergy with the 789 and Sundara using the balanced output. Sundara scales well (I have recently learned) with equipment and it's certainly a combination I would commend to you all.

Around six months or so ago, an idea began to form that actually it might be good fun to invest more seriously in my headphone system, and see what I could achieve. Much of the detail will follow in subsequent posts, but I have a desired end goal in mind; it's exciting and will be painfully expensive to realise, but I have every confidence that the end result will make the effort worthwhile. Suffice to say that I have decided to approach this in a sequence of steps. Some of which have already been undertaken, but much lays ahead.

The only way to really achieve what I want is to put the entire chain on the table; nothing is safe and every component must deliver. Some intermediate steps are a necessity of course. It's important to make sure the direction chosen is the right one.

The first such step was to add the £1300 Arya Stealth to the stable a few months ago. Now don't get me wrong, I love Sundara, I really do. They just do so much right. But Arya takes everything that is great about Sundara and makes it amazing. The soundstage is wider, more immersive, finer detail, better placement of instruments and vocals. Just bewildering. The track 'Wrapped in Piano Strings' on Ghost by Radical Face features a short acoustic guitar solo after the first verse in which the guitar reverberates, jumps between channels and then returns in a stunning display of timbre and decay. It is heavenly through Arya.

Of course Arya is just a small step. I have many other headphones in mind, and expect to have many pairs in the stable ultimately. And that will extend beyond planar magnetics - I have my eye on some exceptional performers...

Sadly, Arya started to reveal areas in which the 789 falls short. That detail the amp delivers comes at a price; the soundstage could be wider and deeper, it could do with more timbre and warmth. Not a lot, but the 789 through Arya is a little sterile. That said, it is still an incredible amp and if you're going to put your own headphone system together it's easily one of the better purchases you'll ever make. But it's not the destination, instead consider it as a good friend accompanying you for part of the journey. Hopefully it'll help you to identify what your own sonic tastes are and make more informed choices moving forwards.

I've since bought one of my 'end game' amps. It arrived from the US two weeks ago and I am super excited to tell you all about it. I know I'm teasing, sorry!

With respect to the DAC element of the chain, I recently sold the Metrum Acoustics Musette to a good home and know it'll continue to perform well. After some discussion with Fretless and much forum and YT research, I bought the Denafrips Ares II and Iris DDC as an interim solution. The sound quality was initially bloody awful; I really struggled to understand what everyone was raving about. Alvin at Vinshine, Singapore suggests 10 days of burn in time. I have to say that just isn't long enough. It took at least 2 weeks of 24/7 streaming Roon to transform a closed soundstage which lacked clarity, detail, air and consistency into a surprisingly musical and engaging experience. It isn't detailed enough for me though, but it has caused me to wonder how much better more expensive Denafrips DAC and DDC combinations might be.

I shall cover DACs in greater depth in future posts, but this aspect of the upgrade is likely to take some time. I will be trying at least four or five different models from various NOS or R2R manufacturers. There are also a couple of FPGA based itches to scratch, but more on that later.

I shall leave the tale where it is for now my friends. I hope this has been of interest; I know I have enjoyed writing it. Again. So until next time, I shall leave you with a few photos. 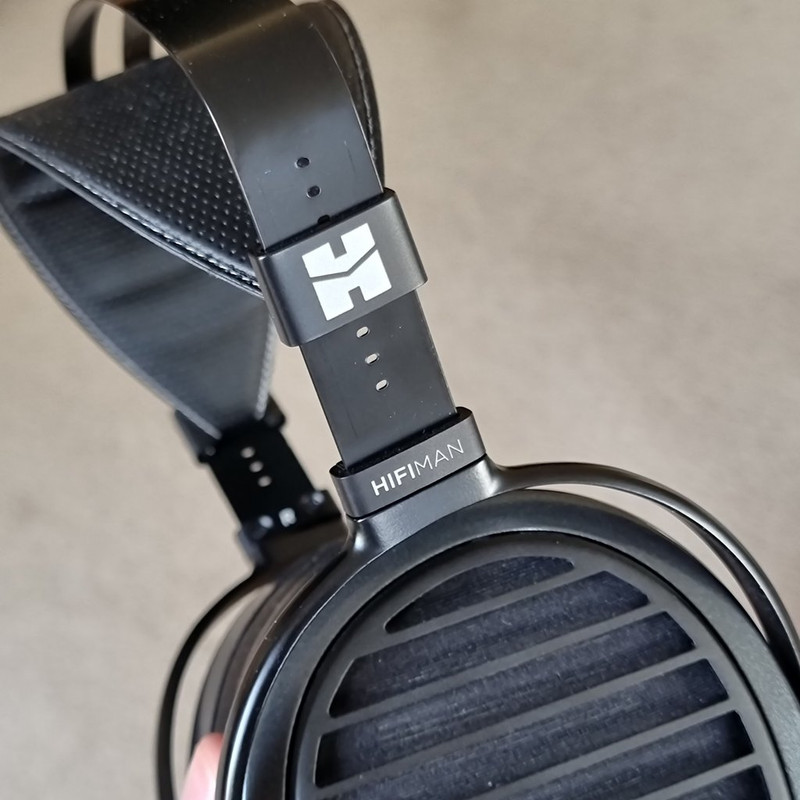 Serious work there GH. Plenty to think about and an example of consideration and effort.

Fretless wrote: ↑Sun Nov 06, 2022 1:51 pm Serious work there GH. Plenty to think about and an example of consideration and effort.

Around two years ago now I read this review, which I was intrigued by and was to return to periodically and wonder. Of course I looked at lots of other HPAs during that period, Woo Audio, Feliks, DNA, Eddie Current etc. As is usually the way when I become interested in something, I read everything I could find about HPAs; the various opinions of tubes over solid state, synergy with partnering components, tube selection and just about everything covering all of the other aspects.

I have already partially covered the thought process that lead to the current headphone system upgrade, but when I started to think about what the system should look like, I decided that I had to set some lofty goals and have something to aspire to and work towards. I recognised that I needed to have a reference to measure various new headphones, DACs and source components against and settled on the idea that the reference should be the HPA.

After a great deal of thought, and some pondering, and some more thought followed by more pondering, I decided to contact Linear Tube Audio and ordered a new MZ3 HPA.

The MZ3 is an ZOTL (Zero hysteresis Output Transformer-Less) HPA, using a circuit designed by David Berning. You can read all about the approach here and more specific details about the MZ3 here. The benefits are listed in the linked article, but one of the more useful ones is that tube life is significantly extended; I expect my current tubes to last around 10,000 hours.

I placed the order in September and the build takes 3-4 weeks. The MZ3 arrived just before half-term in October, but with builders on site at home and a family holiday to attend to, it was to be two more weeks before I was able to unbox the MZ3 and enjoy my first tube based HPA experience.

LTA do an initial 'burn in' prior to delivery as part of their QC process, and I have to say that it sounded really nice out of the box and has just gotten better every time I've listened to it since. I shall cover my personal listening impressions another time, but don't expect War & Peace please. I simply lack the beautifully ornate, descriptive language that some possess. Suffice to say, it's a smile inducing experience...

So for now, please enjoy these photographs. 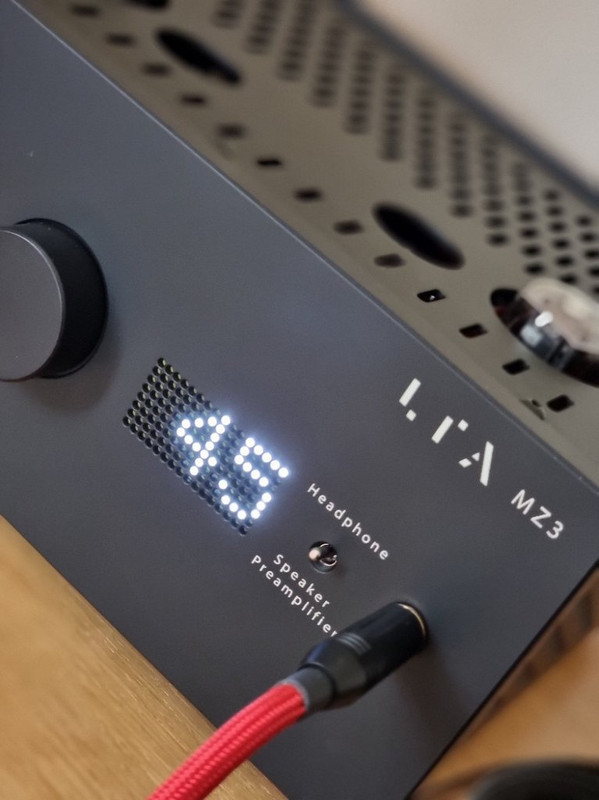 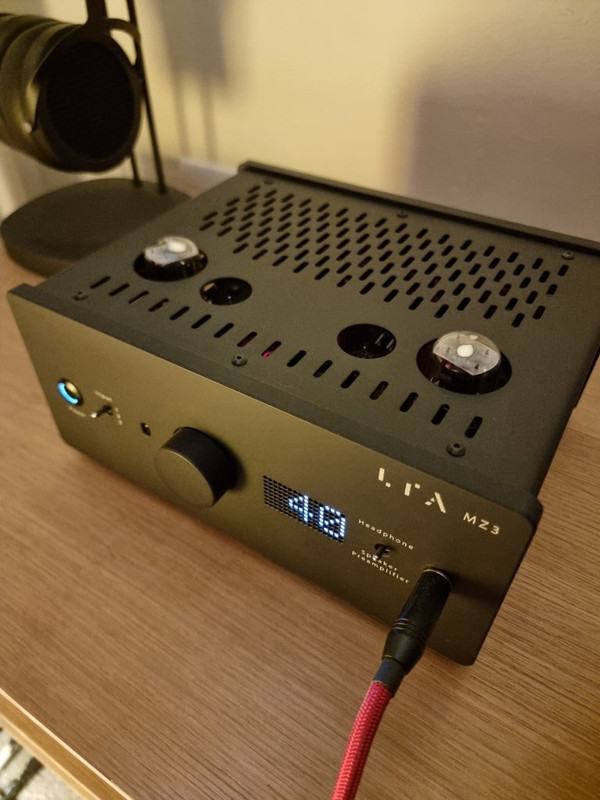 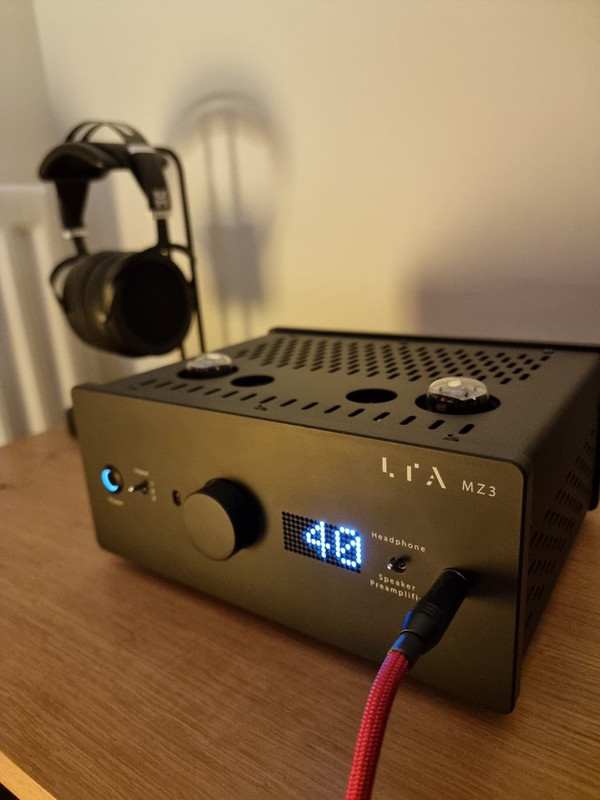 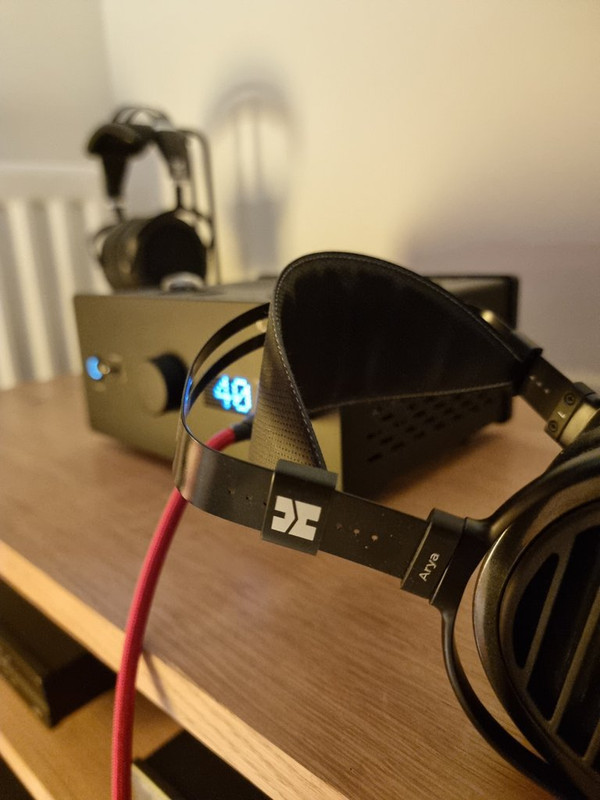 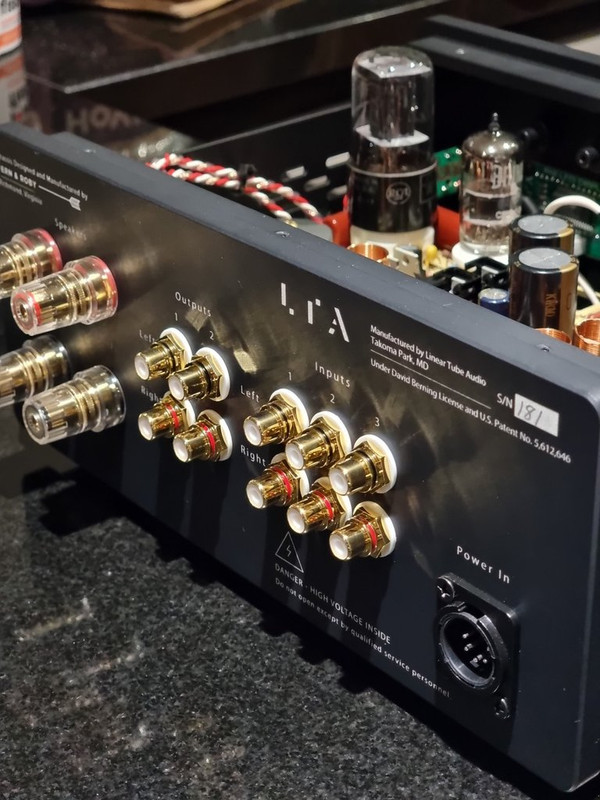 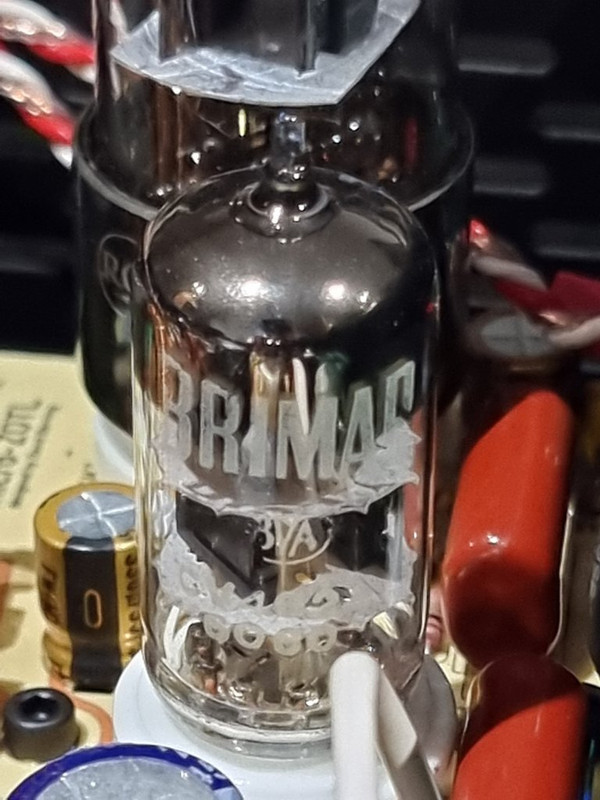 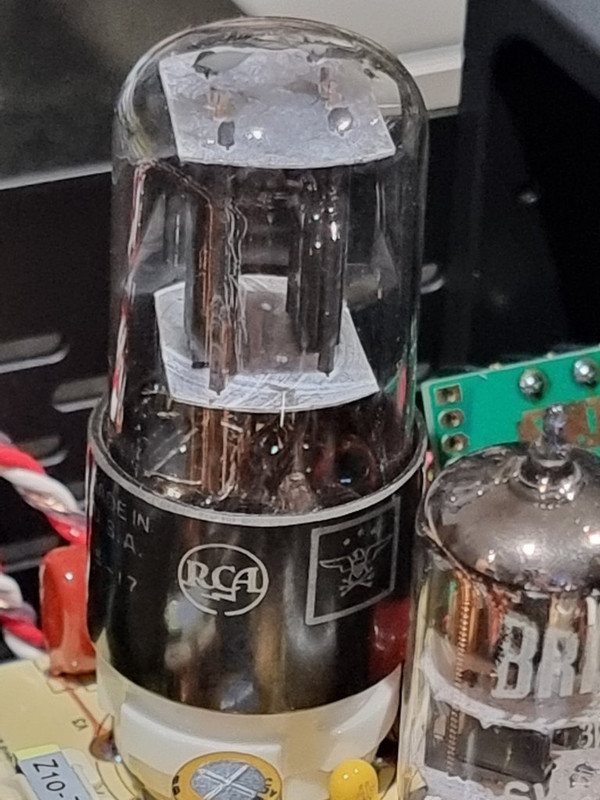 In terms of next steps, I am currently waiting for delivery of a truly exceptional pair of headphones I ordered last week, and I'm about to order a new DAC to replace the two month old Denafrips Ares II that is currently performing well. More on all of that in due course.