Well Maverick Sabre and the Band on the Wall delivered an outstanding evening. It's a perfect size for me, the staff are really good, it's easy to get served and there's a good mix of people. Even the car park was cheap (£3) and relatively safe.
We were close to front and he knows how to work an audience, it was one those gigs where it gets sweaty and raucous almost from the first song. All in all a brilliant experience

A heads up for Led Zep fans.

Jimmy Page will be giving a talk about his career at the Hay Festival on 2nd June, tickets £12 on sale today. Ordered mine.

My first live listen for nearly two and a half years, rescheduled Nick Mason's Saucerful of Secrets. It was very enjoyable with very varied material from the beginning up to Obscured by clouds which I have always regarded as a strong album alongside Meddle. Pink Floyd came up with some great stuff before DSOTM made them mega. Some obscure Syd Barrett songs were included along with the familiar famous ones. The highlight for me was Echoes along with the concluding Bike which had everyone singing along to the nonsense lyrics. Tributes were made to Syd Barrett and Rick Wright, one of the band being a relative of the later. I met some former work colleagues at the bar whom I had not seen since Covid put an end to concerts.

Apologies this one is a bit of mind dump and for those who just want a summary, well it was the first gig in over 20 years where I thought, this is not for me.

Its a great venue and one first visited many decades ago, the house was full with an amazing stage set that would not have looked out of place on Glastonbury's Pyramid stage. Approx 2 hours 45 minutes of music from 3 very diverse "acts" and a good sound mix throughout.

First up a 4 piece from Southampton call Wild Front, they formed around 2016 but I had only ever heard the odd track on 6 music. I loved them, they were a wonderful surprise and kicked off their 30 minute set off with front man Jack Williams singing/breathing closely into his guitar to make a sound I have never heard before. From there on their sound filled the place with wonderful layers and to my ears their live sound has a nod to " War on Drugs/Manchester Orchestra with maybe a touch of The 1975. The lead guitarist Joe Connell stole the show, he is nothing short of brilliant.

Next up was a lady called Tawiah accompanied by some guy on a mini keyboard. I had never heard of her so I no idea what to expect from her 30 minute set. First song and you are hit by her amazing voice, its stunning and when the songs were strong it was joyous but the set was all over the place and rather than ending on a song that brings everything together she chose to sing a song called Death which was about a persons last thoughts. She is clearly a very gifted singer but in my opinion she needs better material and backing to make the most of her gift.

Last but not least the Mercury prize winning Michael Kiwanuka. I bought my tickets back in Sept 2019 and the gig was scheduled for late March 2020. Back then MK was fresh and hot but a lot has happened in the passing years. As always we were standing, the thought of sitting down to a gig is an absolute no no whilst my health is good. The crowd was in good spirits, we were close to front, the light show was truly spectacular but neither Christine or I got in to it. For the first time in over 20 years I was looking at my watch for the wrong reasons. When I buy tickets for gigs I buy them because I want to be part of the event, I want to be involved, to participate, to feel at one with the rest of the crowd and the singer/group.

For MK's set we were spectators, bystanders, detached from the music and his set, at one point I was counting the number of speakers in the vertical stacks either side of the stage (10 in each if you are curious). Then I counted the number of spare plectrums in the mic stands, whilst wishing for the set to get to me in the mood or end, the end came first.

By the law of averages if you go to lots of gigs its a fact that every now and then one or more will leave you underwhelmed and MK's headline set did just that.

ps MK's drummer was outstanding, I suspect Stu would have loved his performance.
Mr Modify

My tickets have arrived in the post, after winning the "lottery" to be allocated them. I can hardly wait. 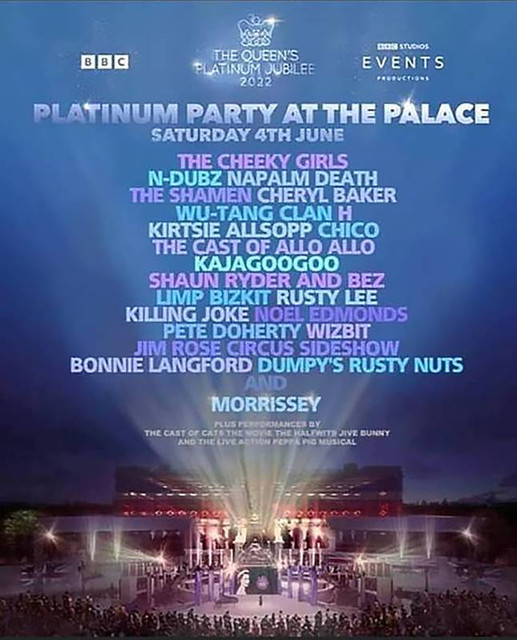 Gutted, I heard Julian Cope was going to be the MC, oh well the next jubilee will be along before you know it...
Top